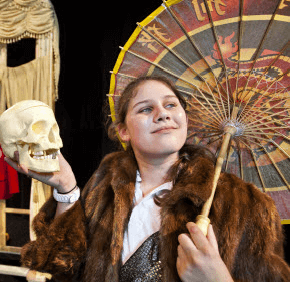 By Elizabeth Lowe
elowe@CatholicReview.org
Twitter: @ReviewLowe
BROOKLANDVILLE – When she and thousands of her peers head to college this fall and are separated from their families, Emily Wertlieb will have a leg up.
Wertlieb, who graduated from Maryvale Preparatory School June 7, began living with a classmate after her parents and two younger siblings moved from Maryland to Connecticut during the summer of 2011.
“I accept it for what it is,” the 18-year-old said matter-of-factly. “It isn’t a problem. I couldn’t imagine myself anywhere else. I always thought if that were to happen, that’s what I wanted to do.”
Emily’s father, Jordan Wertlieb, is the former president and general manager of WBAL-TV, the NBC affiliate in Baltimore. He is now president of Hearst Television Inc.
“Emily has not only thrived, but she has grown more mature than any other senior I have ever seen,” said Mary Pat Tilghman, Maryvale’s campus minister and Wertlieb’s adviser. “She is more willing to stand on her own two feet and speak her mind than any other young person I’ve met.”
Wertlieb regularly talks to her family on the phone and sees them about once a month. She said they come to Maryvale “for everything – plays, concerts, big events. It means a lot that they like to come and see the plays.”
Wertlieb, who graduated with a 3.32 GPA and took honors and advanced placement classes, will attend Indiana University in Bloomington, Ind., in the fall. She aspires to teach English and theater.
“My favorite subject is English,” Wertlieb said. “I love writing.”
“Emily will be a fabulous teacher,” said Nancy Burkhart, Maryvale’s director of music and drama. “I see her directing dramas as part of an English department. She’s such a natural and she’s been a very good leader.”
Since sixth grade Wertlieb has performed in 14 school musicals, spending countless hours helping build sets, memorizing lines and rehearsing.
“I took a drama class in fourth grade,” Wertlieb said. “It was so fun and you could act crazy and no one cared. I memorize things well. It just sticks and you don’t have to think about it.”
Her favorite role was portraying a candlestick in “Beauty and the Beast” last fall.
“All my friends were in it, we all hung out together,” Wertlieb said. “It was really fun.”
Wertlieb, a member of TRI-M Music Honor Society, performed in three chorus ensembles and was co-editor of Grey Towers, Maryvale’s student newspaper.
She completed about 120 hours of community service, surpassing the school’s 100-hour graduation requirement.
“I like helping other people – it’s important,” Wertlieb said. “There are a lot of opportunities and I try to take advantage of that.”
A parishioner of the Catholic Community of St. Francis Xavier in Hunt Valley, Wertlieb participates in its youth group and has volunteered with confirmandi activities.
“I know everyone there,” Wertlieb said. “It (faith) was always important to me. It was always there.”