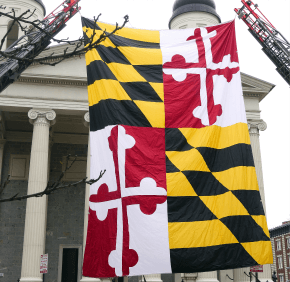 By Paul McMullen
pmcmullen@CatholicReview.org
Twitter: @ReviewMcMullen
What do Pope Francis, Prince Charles and a church in historic St. Mary’s City have in common?
All will receive crosses made from the roots of the nation’s last-standing “Liberty Tree,” which served as a meeting spot in Annapolis during pre-Colonial and Revolutionary times.
The gifts recognize standard-bearers of religious freedom, and come from a state founded on that concept. They were blessed March 25 during a Maryland Day program at the Basilica of the National Shrine of the Assumption of the Blessed Virgin Mary in Baltimore.
It was the 381st anniversary of the day in 1634 when the Ark and Dove reached St. Clement’s Island, in what is now St. Mary’s County, and brought the first European settlers to Maryland’s shore. They included three Jesuit priests and other Catholics seeking religious freedom, which made the Baltimore Basilica, America’s first cathedral, a natural location for the observance.
“We … remember and give thanks for the founding of Maryland and for Lord Baltimore’s vision of religious toleration,” said Baltimore Archbishop William E. Lori, chairman of the U.S. Conference of Catholic Bishops Ad Hoc Committee for Religious Liberty.
The 80-minute program included anthems, pomp and period dress. In Native American dress, Daniel Fire Hawk Abbott, of the Nanticoke Indian Tribe, offered greetings from the People of the Chesapeake, and began, “Brother, sister, it is a good day.”
“Maryland: First in Freedom of Conscience,” was sponsored by the Society of Colonial Wars in the State of Maryland and organized by Scott Watkins, a parishioner of St. Ignatius in Baltimore. His pastor, Jesuit Father William Watters, gave the invocation.
The spirit of Andrew White, the Jesuit missionary who became the first Catholic priest to celebrate Mass in what would become the original 13 colonies, was acknowledged, as were Cecil Calvert, the aforementioned second Lord Baltimore, who established the Maryland colony; John Carroll, the first bishop of Baltimore, the Premier See; and the nation’s only Catholic president.
“True to the vision of Cecil Calvert,” Archbishop Lori said, “let us remember the words of President John F. Kennedy’s inaugural address, when he said that religious freedom is not granted by the generosity of the government but by the hand of God.”
The archbishop recounted a trip he made to England last December, to visit sites related to the founding of Maryland, including Wardour Castle, where John Carroll briefly served as chaplain.
Dr. Henry M. Miller represented St. Mary’s City, where he led the 2009 reconstruction of the 1667 St. Mary’s Chapel recognized as the first brick Catholic church in the colonies. He lamented that when it comes to recognizing the pioneers who preceded the Founding Fathers, “why is Cecil Calvert left behind?”
The Embassy of the United Kingdom and Charles, the Prince of Wales, were represented by Dr. Major Andrew Churchill, Royal Signals, who is stationed at Fort Meade. He noted that “freedom of worship” is paramount to Prince Charles, and that the Baltimore Basilica was designed by Benjamin Henry Latrobe, “a fellow Brit.”
The interfaith blessing of the crosses was led by the Very Rev. William Noble McKeachie, former rector of Old St. Paul’s, the landmark Episcopal parish just south of the basilica. It included Archbishop Lori, Father Watters and Monsignor Arthur W. Valenzano, basilica rector.
According to the Archdiocese of Baltimore, the goal is for organizers of the Maryland Day program to present Pope Francis, himself a Jesuit, one of the “Liberty Tree” crosses at the Vatican.
According to Watkins, the crosses, eight inches high and atop an orb, were made from roots of a 600-year-old tulip poplar which had served as a gathering place on what became the campus of St. John’s College, a short walk from the Maryland State House. It fell in 1999.
According to Maryland Day organizers, the first treaty between Lord Baltimore and the Susquehannocks was witnessed there in 1652.
“This is a wonderful way to learn about Maryland history and its people,” Watkins said, “and to remind people that this is the first place where freedom of conscience did spring.”
Also see:
Archdiocese teachers inspire the gifted
7 meatless ideas for Fridays during Lent
PrevNext