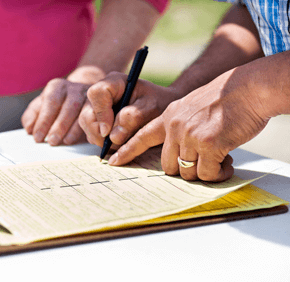 A petition to put the state’s new same-sex marriage law to popular vote has collected more than 30,000 voter signatures, marking the drive’s halfway point, according to the Maryland Marriage Alliance.

“The effort continues, but this a great moment, and one that obviously we are building on,” said Kathy Dempsey, communications director for the Maryland Catholic Conference.

The Maryland Marriage Alliance is leading the referendum effort, partnering with the Maryland Catholic Conference.

Nearly 56,000 valid signatures are needed by June 30 to add the measure as a referendum to the November ballot, with half due May 31 to the Maryland State Board of Elections.

In February, The Maryland General Assembly passed a bill changing the state’s definition of marriage, making it legal for same-sex couples to wed. Gov. Martin J. O’Malley signed the measure into law March 1. It is scheduled to take effect next year.

“In the 31 states to consider the marriage issue, 31 times voters have rejected same-sex marriage and reaffirmed the definition of marriage as a union between one man and one woman,” said Maryland Marriage Alliance executive director Derek McCoy in a May 2 statement. “We are confident that Maryland voters will have this opportunity in November, and that they will act on it.”

Cardinal Edwin F. O’Brien has strongly encouraged Catholics to sign the petition. Like other churches and organizations, the state’s Catholic parishes have hosted petition signings since the effort launched in March.

Most expected signatures have yet to be collected or submitted, Dempsey said.

“We’ve only been active in the Catholic parishes for a couple weeks since Easter, and many Catholic parishes have yet to hold their petition drive,” she said. “It’s encouraging and not unexpected to see the outpouring of concern and interest in upholding marriage in Maryland.”