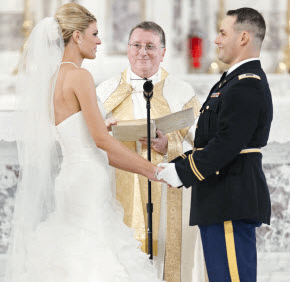 This is the fourth in a four-part series examining election-related issues.

Doug Mainwaring may seem like an unlikely advocate for marriage to remain a union between one man and one woman.

A Catholic living in Gaithersburg, Mainwaring, 55, took a break from his job in real estate to rally for conservative fiscal policies. Now he is raising his voice on marriage, which is on the ballot in Maryland.

“Two men or two women are not the same as a man and a woman,” Mainwaring told the Catholic Review. “My biggest concern is children who are young now will grow up and marriage … will be anything they can think of. That’s going to be a tremendous loss for society.”

In February, the Legislature voted narrowly to legalize same-sex marriage, and Gov. Martin J. O’Malley signed it into law March 1. It is scheduled to take effect Jan. 1, unless voters overturn it at the ballot box in November.

As part of the Maryland Marriage Alliance, a coalition formed to protect traditional marriage, the Maryland Catholic Conference helped to gather 160,000 signatures seeking to bring the measure to public referendum, far surpassing the 56,000 valid signatures required.

It is one of seven ballot measures voters will face Nov. 6, listed as Question 6. Now the MCC, with Baltimore Archbishop William E. Lori at the helm, is working to “Nix Number Six.”

The MCC, an advocate for public policy on behalf of the state’s bishops, roots its position in the good of children, arguing that whenever possible, they deserve to be raised by their biological parents.

“The primary reason for preserving the legal recognition of marriage as existing only between a man and a woman is not for the sake of the couple, but for the sake of children and their elemental desire to know, and ideally be raised and loved by, their biological mother and father,” Mary Ellen Russell, the MCC’s executive director, told the Maryland General Assembly before it passed the law.

The Maryland Marriage Alliance emphasizes that the law does not create a “separate form of marriage to coexist alongside traditional man-woman marriage.” Rather, the organization’s leaders say, it seeks to completely change the nature of marriage.

Same-sex marriage is legal in six states – Massachusetts, Connecticut, Iowa, Vermont, New Hampshire and New York – as well as the District of Columbia. However, 31 states have constitutional amendments defining marriage as a union between one man and one woman, with North Carolina joining the list in May.

America’s eyes are now on Maryland, said Frank Schubert, a strategist who managed the North Carolina campaign and is the national political director for the Washington, D.C.-based National Organization for Marriage, which aids states with marriage-related initiatives. Schubert is advising the Maryland Marriage Alliance.

“We cannot afford to lose anywhere,” he said before a Sept. 26 meeting of interfaith leaders at St. Mary’s Seminary in Baltimore. “Our opponents have been very successful through the media to create an artificial meme (an idea that spreads from person to person within a culture), and that meme is that the country has changed, that we’ve evolved.

“If we lose here or any of the other states, we give an opening to our opponents to advance their perspective.”

As the MCC and other Catholic marriage advocates rally for votes against Question 6, they ground their position in both Catholic teaching and natural law, requiring them to pull from two vocabularies – one for describing marriage’s theological aspects, the other for a general audience not persuaded by appeals to faith.

At St. Mary’s Seminary, Schubert used both. A Catholic, Schubert considers same-sex marriage the Roe v. Wade of this era, he said, referring to the 1973 Supreme Court ruling legalizing abortion.

“That’s what people don’t understand,” he added. “It’s an attempt to change an understanding of the human person, human love.”

According to the U.S. Department of Health and Human Services, children raised by parents in healthy marriages do better academically and are healthier overall than children who are not.

Father DeAscanis is concerned that the legalization of same-sex marriage could mean that children will be less likely to succeed at marriage, or get married at all. If marriage can be put to a vote, then it could mean anything, in which case it means nothing, he said.

In every civilization, marriage has meant something, its advocates say. While speaking before groups across the archdiocese, Father DeAscanis has outlined marriage as a unique type of friendship that requires three things: permanence, exclusivity and potential to procreate.

For same-sex couples, procreation is biologically impossible, which weakens the need for marriage’s other qualities, Father DeAscanis said.

The idea that marriage’s uniqueness is derived from its procreative potential is not solely a religious idea.

In 2007, Maryland’s Court of Appeals upheld the state’s statute defining marriage as a union between one man and one woman, asserting, “In light of the fundamental nature of procreation … safeguarding an environment most conducive to the stable propagation and continuance of the human race is a legitimate government interest.”

There has been a political push to make same-sex marriage a partisan issue.

President Barack Obama endorsed same-sex marriage in May, and in September Democrats voted to include a plank supporting “marriage equality” in the party’s national platform. Obama also pledged not to enforce the 1996 Defense of Marriage Act, signed into law by President Bill Clinton. In Maryland, O’Malley has played an active role advocating and fundraising for the same-sex marriage campaign.

Obama, Clinton and O’Malley are Democrats.

However, not all Democrats are in lockstep with current party leadership. According to Maryland State Board of Elections data, about 53 percent of board-certified referendum petition signatures were from Republicans, with nearly 37 percent submitted by Democrats.

Same-sex marriage proponents argue that their position demands “equality” and relate their efforts to the African-American civil rights movement.

For Mainwaring, that argument is a red herring. Although he endures hefty criticism from same-sex marriage supporters, Mainwaring maintains that supporting same-sex marriage is not synonymous with supporting gay rights, because of marriage’s uniqueness. He knows other homosexual men and women who share his views.

“You can want to protect the idea of marriage, and not be in anyway homophobic,” he said.

Archbishop Lori emphasized Sept. 26 that interfaith leaders working to uphold marriage “believe that our support for the truth about marriage is not a position of discrimination.”

Already, many of the benefits afforded to married couples are available to Maryland’s domestic partners, including health care decision-making and facility visitation, adoption, state employee health benefits and some tax exemptions.

The Maryland Marriage Alliance is concerned that the referendum’s ballot language may mislead voters, as it focuses on religious liberty protections the law supposedly affords.

The first is a “nearly non-existent risk” and the second is nullified if an organization provides services, such as charitable programs, under government contract, Nussbaum wrote.

“If same-sex marriage laws without robust religious exemption are permitted to stand, it is much more likely that ministries with traditional religious beliefs will find themselves barred from using public parks, renting government buildings, staffing themselves with like-minded people of faith, acquiring essential licensure and bidding on government social services contracts.

“They may also find themselves required to provide leave and medical benefits contrary to their faith, and will experience assaults on their tax-exempt status,” he wrote.

Maryland’s law also has no protections for individuals, and MMA executive director Derek McCoy fears Marylanders could face situations such as the one where Catholic bed-and-breakfast owners in Vermont were sued after not permitting a lesbian couple to have a wedding reception on their property. The owners were also required to promise they would no longer hold any wedding events at their business.

Sanctions for not supporting same-sex marriage hit close to home last week when the chief diversity officer at Gallaudet University in Washington, D.C., was put on paid administrative leave for signing the referendum petition to put same-sex marriage to public vote in Maryland.

He stresses that upholding marriage affirms right reason and church teaching, and is “good news for society.”

“While sometimes good news is difficult news, sometimes good news requires rethinking and sacrifice, it is of such fundamental importance for our society and a church that we really need to hold fast to it,” he said. “We need to speak the truth in love.”

Part one of the series.

Part two of the series.

Part three of the series.