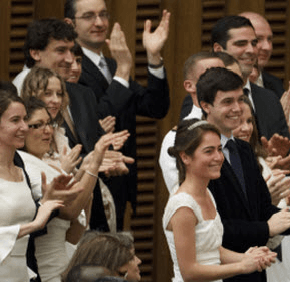 Pope Benedict XVI sounded an alarm for the whole world to hear Jan. 9. As he gathered with diplomats from 180 countries, the pontiff framed challenges to traditional marriage in the gravest terms.

“(Family) is not a simple social convention, but rather the fundamental cell of every society,” the pope said. “Consequently, policies which undermine the family threaten human dignity and the future of humanity itself.”

Calling the family unit “fundamental for the educational process and for the development both of individuals and states,” Pope Benedict said there is “a need for policies which promote the family and aid social cohesion and dialogue.” Pride of place goes to the family, he said, “based on the marriage of a man and a woman.”

In the face of increased rates of cohabitation and divorce, and legislative attempts to legalize same-sex marriage, the church is perhaps the largest institution in the world defending traditional marriage.

Its voice, however, is frequently tuned out by state governments and weakened social mores, leading to the question: do enough people care to rally to the church’s cause to win the fight for traditional marriage?

According to a survey released in December by the Pew Research Center, barely half of U.S. adults are married, a record low.

An estimated 72 percent of Americans 18 and older were married in 1960. That rate has since dropped by 21 percentage points. In Maryland, only 50 percent of adults are married. According to Pew, new marriages have dipped by 5 percent in the last two years alone; nonetheless, 61 percent of those who have never been married say they want to do so.

The study’s authors told Catholic News Service that the recent drop in the number of new marriages could have to do with the economic recession, but the linkage “is not entirely clear.”

Lauri Przybysz, marriage and family ministry coordinator for the Archdiocese of Baltimore, said the statistical trends hit home. According to a 2009 diocesan census, there were 1,507 marriages that year. In 2000, there were more than 2,000.

“It’s an alternative lifestyle in some people’s minds,” she said. “They’re just passing on marriage. Couples are more likely to live together and not make the commitment of marriage.”

Przybysz said that between 70 percent and 80 percent of engaged Catholic couples have lived together prior to being married, a practice opposed by the church.

“They have this idea from society that it’s the responsible thing to do,” Przybysz said. However, she added, “You can’t pretend to be committed.”

Przybysz, who has been married for 38 years and has five married children, provides resources for married couples and administers the archdiocese’s marriage preparation programs.

Przybysz recently completed her pastoral ministry doctorate at The Catholic University of America by setting up a marriage-enrichment program for Catholic parents in two archdiocesan parishes. “As a church community, we can promote and strengthen married couples to be the best examples they can be,” she said. “It’s a public institution that builds up society. We don’t want to redefine marriage. Only a man and a woman can have children. Marriage gives everybody hope for the future.”

Maryland Gov. Martin J. O’Malley, a Catholic, is sponsoring legislation to legalize gay marriage, which, if passed, would make Maryland the seventh state, plus the District of Columbia, to alter the definition of marriage.

Before the governor announced his intentions in July, Cardinal-designate Edwin F. O’Brien privately wrote him to ask him not to redefine marriage. The leader of the archdiocese’s 500,000 Catholics more recently called approximately 10 Catholic members of the House of Delegates to do the same.

Cardinal-designate O’Brien, apostolic administrator of the Archdiocese of Baltimore, told the Catholic Review it was “arrogant” to dismiss traditional marriage, an institution he considers fundamental to building up society.

As gay marriage has become reality elsewhere, Catholic institutions have had to curtail their social outreach. Catholic Charities in Illinois, for example, was forced to abandon adoption and foster-care services after civil unions were legalized there.

Flipping the logic on those who champion same-sex marriage, Cardinal-designate O’Brien asked, “Where’s the tolerance?”

Cardinal-designate O’Brien said some of the delegates “have their own opinions on these things,” and view traditional marriage as “old-fashioned.”

“Because they have friends who might be gay,” he said, “they think it’s all right to question this whole thing and to vote for an overturn (of the definition of marriage).”

Should Maryland lawmakers approve gay marriage, opponents have promised to take the issue directly to voters through a referendum.

Mary Ellen Russell, executive director of the Maryland Catholic Conference, the lobbying arm of Maryland’s bishops, said same-sex marriage is being pushed by a small group of advocates.

“If we dismantle the connection between marriage and mothers and fathers of children,” she said, “we risk losing sight of the tremendous importance of keeping the nuclear family intact.”

Treating marriage differently from other relationships is not discrimination, Russell said, noting that there are already laws on the books that provide benefits for those in same-sex relationships.

While it’s always a challenge to get people engaged on legislative concerns, Russell said, “people are really waking up to this issue.”

The Rev. Derek McCoy, executive director of the newly formed Maryland Marriage Alliance, said more than 500,000 people are represented through his interfaith, nonpartisan organization, which counts the Maryland Catholic Conference as a supporter.

“We are not against any group of people at all,” Rev. McCoy said, “but we are very strong in stating that the current definition should be upheld.”

Even after Cardinal-designate O’Brien leaves Baltimore for his new post as grand master of the Order of the Holy Sepulcher in Rome after his successor is installed, marriage in Maryland will remain a priority for him. He will maintain a residence in Baltimore and remain a Maryland citizen, he said.

“I’ll have great interest and follow very closely and do what I can to help the next archbishop if he asks for help,” Cardinal-designate O’Brien said. “There’s a lot at stake here for the future. We won’t be intimidated and forced to go against conscience.”