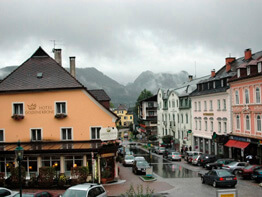 ROME – The sanctuary at Mariazell may lack the dazzle of more famous Marian shrines, but its simplicity has helped make it Austria’s most popular pilgrimage site.

“Mariazell is not a ‘spectacular’ sanctuary. There are no apparitions or miracles that fill the pages of newspapers,” said Benedictine Father Karl Schauer, superior of the sanctuary.

“There is no particular form of religiosity here, and no particular group has taken over this place for itself,” he told the Vatican newspaper L’Osservatore Romano.

Perhaps because Mariazell is “so normal,” as Father Schauer put it, the place attracts about 1 million pilgrims each year. They make their way to a mountain valley that is off the beaten track, far from major transportation centers.

Among past pilgrims was Cardinal Joseph Ratzinger, who last visited Mariazell in 2004, a few months before his election as Pope Benedict XVI. He is coming back Sept. 8 to help mark the sanctuary’s 850th anniversary.

Tradition holds that a Benedictine monk named Magnus was sent by his monastery to this remote area in 1157 to minister to local Christians. He brought with him a small statue carved from linden wood, depicting Mary with Jesus, who holds an apple while sitting on her lap.

According to legend, near the end of his journey Magnus prayed before the statue at a place where a boulder blocked his path. The boulder split and he continued on his way.

When the monk arrived, local residents helped him build a monastic cell with a chapel, where the statue of Mary was kept. The name Mariazell refers to “Mary’s cell.”

Over the years, as people came to pray, the statue was credited with miracles and answered prayers, and the church had to be expanded several times to accommodate the ever-increasing crowds.

By the 1300s, the sanctuary was drawing pilgrims from regions that today are part of Austria, Hungary, France, Italy, Croatia, Czech Republic, Switzerland, Germany and Poland. Our Lady of Mariazell has been honored as Austria’s Great Mother, the Mother of the Slavic Peoples and the patroness of Hungary.

In 1377, King Louis of Hungary built a Gothic church at the site, in thanks for an earlier military victory over Turkish forces.

Under the House of Habsburg, a leading defender of the Counter-Reformation, Mariazell was made a national shrine in the 17th century, further stimulating pilgrimages.

The modern Basilica of the Shrine of Mariazell dates to the mid-1600s, and has recently undergone a major restoration. It sits atop the site of Magnus’ original cell, and incorporates some parts of the 14th-century Gothic church.

Mariazell continued as a regional devotional center even under European communism, when pilgrimages from neighboring Eastern European countries were restricted.

In 1983, Polish-born Pope John Paul II became the first pope to visit Mariazell. Pope Benedict will follow in his footsteps, celebrating Mass and presiding over vespers with priests, religious and seminarians.

Austrian church leaders describe Mariazell as “a place for everyone,” and note that it has hosted important ecumenical encounters in recent years.

Father Schauer said Mariazell also appeals to fallen-away Catholics who come in pilgrimage.
“They are better able to find a home here than elsewhere,” he said.