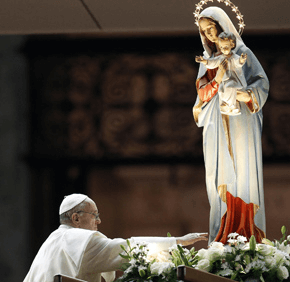 By Carol Glatz and Catholic Review staff
October is traditionally the month of the rosary and thousands of members of groups promoting Marian piety will be coming to the Vatican this weekend for an evening of Marian prayer with the pope on Saturday and a special Mass on Sunday.
By Pope Francis’ request, the original statue of Our Lady of Fatima will be brought to the Vatican for the celebrations. It will be only the 11th time since the statue was made in 1920 that it has been removed from the  Shrine of Our Lady of Fatima in Portugal.
Below is guide for how you can follow the Vatican events live online and how parishioners in the Archdiocese of Baltimore can get involved:
(Click for the official liturgical booklet for Saturday’s event in Vatican City and the official booklet for Sunday Mass.)
Schedule for Vatican City
Saturday October 12
5  p.m. (Rome time; 11 a.m. EDT)  Live streaming online here.
Pope Francis and pilgrims will welcome the statue of Our Lady of Fatima to St. Peter’s Square. There will be a Via Matris, or Way of the Mother, and a catechesis by the pope.
Afterward, the statue will be taken to the Rome Shrine of Divine Love, where the Diocese of Rome plans an all-night vigil and recitation of the rosary.
Sunday October 13
10:30 a.m. (Rome time; 4:30 a.m. EDT) Live streaming here.
The statue will return to St. Peter’s Square for the recitation of the rosary and Mass with Pope Francis. The pope will consecrate the world to Mary during the event.
Oct. 13 is the date marking the first working session of the Second Vatican Council, which had been officially opened two days prior in 1962.
It is also the date of the sixth and final apparition of Mary to the three children in Fatima in 1917. The statue’s gold crown holds one of the bullets Blessed John Paul II had been shot with on the feast of Our Lady of Fatima, May 13, 1981.
Pope Pius XII and Blessed John Paul II had consecrated the world to the Immaculate Heart of Mary and most recently, Pope Francis asked that his ministry be consecrated to Our Lady of Fatima.
Archdiocese of Baltimore
In the Archdiocese of Baltimore, Archbishop William E. Lori is inviting Catholics to pray the rosary on Sunday, and more regularly thereafter. A guide to praying the rosary can be found here. The archbishop has also asked that the Memorare (a devotional prayer to Mary) be prayed at all Masses this Sunday and that Marian songs be incorporated into the liturgies.
Bishop Mitchell T. Rozanski will celebrate Mass at the Immaculate Heart of Mary Church, Towson 8 a.m. Oct. 13. Following the Mass, he will place flowers at a statue of Mary outside the church. All are welcome to attend.
PrevNext