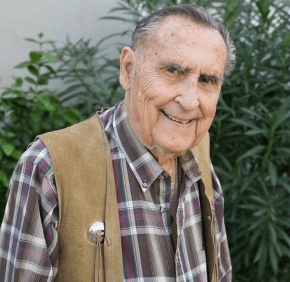 By Catholic Review Staff
“Loyola did something for me, and I want to do something for them,” said 1949 Loyola graduate Gordon Erberts, who majored in chemistry and modern biology.
Erberts’ something turned out to be donating $1.5 million to the Baltimore City school, which will support programs and initiatives in Campus Ministry and the office of mission integration.
Erberts, who commuted to the school from his Ten Hills neighborhood, and eventually found his way into the mutual fund business and his current residence in Toluca Lake, Calif., was inspired to make the gift after reflecting on his experience at Loyola and the rigorous Jesuit education that prepared him for success.
“The Jesuits are darn good teachers. They did a good job with me, and I want to pass that on to today’s young people to give them a head start on life.”
His gift benefits multiple initiatives focused on mission and ministry, primarily through four endowed funds. Loyola will create the Erberts Campus Ministry Endowed Fund to support the programmatic needs of Campus Ministry and the Erberts Assistance Fund for Student Retreats to provide grants to students who require financial assistance to attend campus-sponsored retreats.
In addition, Loyola will create the Erberts Ignatian Retreat Endowment Fund to support the Ignatian retreat program for Loyola faculty, staff, and administrators. Finally, Loyola will create the Erberts Pilgrimage Endowed Fund, which will support programs that promote the Catholic and Jesuit activities and mission of Loyola.
The remaining dollars will be allocated equally among faculty development initiatives, student integration efforts, and related publication expenses.
“Exceptional students from all over the world choose Loyola because of our commitment to the quality and value of a challenging Jesuit education,” said Jesuit Father Brian F. Linnane, Loyola’s president. “Mr. Erberts recognizes that commitment, and his tremendous generosity will provide enriching opportunities for members of our community to strengthen their connections to one another and our mission to serve others.”
Also see:
Pope, Britain’s Queen Elizabeth have informal meeting at Vatican
Loyola Blakefield hires Loyola University grad as principal
PrevNext