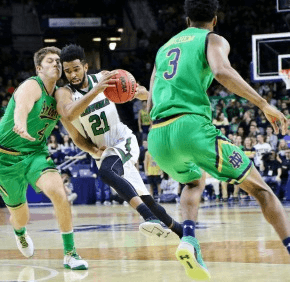 By Catholic Review Staff
The men’s basketball team from Loyola University Maryland in Baltimore will stage a Catholic Schools Day promotion at its Dec. 23 game against UMass Lowell. Tip-off at Reitz Arena, on the college’s main campus, is 1 p.m.
Students wearing their respective Catholic school’s gear will get free admission; admission for their parents will be $5. In addition, Catholic elementary and middle schools serving disadvantaged populations can receive blocks of free tickets.
“We are looking forward to hosting families of Catholic school students who might not have been to a Loyola athletics event in the past,” said G.G. Smith, the Greyhounds’ fourth-year coach. “We know students (in the Archdiocese of Baltimore) will be off that day, so this is an opportunity for us to open our doors to them.”

G.G. Smith coaches the Loyola University Maryland men’s basketball team in a 2015 game at the University of Kansas. The Greyhounds are hosting a Catholic Schools Day promotion Dec. 23. (Laura Jacobson/courtesy Loyola University of Maryland)
His team will host a clinic for Special Olympians in January, and the outreach is not uncommon for the university’s athletic teams.
“One of the great things about Loyola,” Smith said, “is that we live the motto ‘Strong Truths, Well Lived.’ We have opportunities for our players to engage with the community, including with many of those who have not been as fortunate.”
The game will include a book signing of “Running with the Greyhounds” by Jimmy “Jumpshot” Smith, a former player and 1976 graduate of the college.
A member of the Patriot League, which includes Army West Point and the U.S. Naval Academy, Loyola University Maryland has been idle for exams since Dec. 10, when it improved to 5-5 overall with a 90-85 victory over Binghamton. The Greyhounds’ highlights include a 64-57 win over Mount St. Mary’s Dec. 3.
Jarred Jones, a 6-foot-6-inch senior from The John Carroll School in Bel Air, leads the Greyhounds with averages of 15.2 points and 7.3 rebounds per game.
Tickets are available at the Loyola box office on game day. For information, call 410-617-1420.