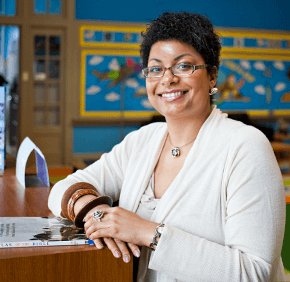 By Maria Wiering
mwiering@CatholicReview.org
HIGHLANDTOWN – Three years ago, Henry Ayala, 12, enrolled at Archbishop Borders School facing a steep learning curve. A Spanish-speaking Honduran emigrant, he could speak a little English, but couldn’t read or write it. He didn’t know the language at all, he said.
After working with language arts teacher Kristina Collins, the seventh grader now speaks English quickly and confidently. It’s imperfect, but impressive.
“After I leave here, I’m going to go to college,” he said. Once there, he plans to study English.
In February, Loyola University Maryland recognized Collins with the 2014 Literacy Educator of the Year Award for her contributions to the pre-kindergarten-to-eighth-grade Highlandtown school, which serves a large Spanish-speaking population and offers bilingual instruction.
The annual award recognizes a Maryland teacher for his or her work in literacy education.
Collins, 32, teaches seventh and eighth graders both language arts and social studies. She’s taught all levels, from kindergarten to college, but middle school students are her favorite, she said. She’s been at Archbishop Borders since 2011.
Helping her students develop an understanding of “academic vocabulary” is her biggest challenge. Much of that is tackled through reading. Each week, students are required to read a book of their choice, write a report persuading their classmates to read it, and present the report to the class.
Collins also launched a reading room down the hall from her classroom, where students can read quietly. A brightly colored poster in her classroom is a reminder: “Read every day.”
Collins collaborates with Loyola’s School of Education through its partnership with the Archdiocese Community Schools, which includes Archbishop Borders.
The Loyola award was an honor, but it’s not what drives her, Collins said.
“I want them to believe in themselves,” she said of her students. “There are so many things that tell them that they can’t.”
In her classroom, “can’t” is one word not allowed.
Collins isn’t alone in receiving Loyola’s acclaim. Debbie Francis, a reading specialist at Our Lady of Grace School in Parkton, received the 2014 Literacy Leader of the Year award, which recognizes alumni of the School of Education’s graduate program.
Francis, who finished a master’s degree in education at Loyola in 2007, has been on staff at the school, also pre-kindergarten to grade eight, since 2006. She works in the school’s reading center, where she helps students with reading difficulties.
The reading center’s goal is to catch students with reading problems early; too often, several years of reading difficulties must be documented for students to receive reading services, Francis said. She hopes to help them before they experience failure.
“It is very simple and very easy to jump in and help these kids right away,” she said. “It’s very rewarding to see how quickly they can grow. If you see them every day, they just make tremendous growth and progress.”
When Francis, 47, scans the group of each year’s graduates, most have visited her office at some point, she said.
She hopes to expand the reading center’s reach in the community, she said, through a greater collaboration with Loyola’s Clinical Centers. The Centers train students in a clinical environment while offering their services to the community.
In addition to honoring their recipients, Loyola’s awards inspire other teachers, said Mark A. Lewis, an assistant professor of literacy education at Loyola. Lewis coordinates the award program for the School of Education.
“Teachers often work in toil and silence,” he said. “We hope that these awards honor teachers who are doing really important work, whose stories haven’t been told.”
Loyola first offered the Literacy Leader of the Year Award in 2008, and added the Literacy Educator of the Year Award in 2011.
Studies show a student’s grade-school reading ability is a significant indicator of future success. Because of Collins and Francis’ work, that future is looking brighter for students like Ayala. He now encourages other students who are facing the daunting task of learning English as their second language. He tells them he was once in their shoes.
“I tell them to never give up, and they’re going to learn,” Ayala said. “When they need help, I just help them translate.”
He also helps Collins with her Spanish, he said with a smile.
He added: “That feels great.”
Also see:
Tribute to St. John Baptist de la Salle – patron saint of Catholic schools, teachers
Spalding stands out for sharing meals with the homeless
PrevNext