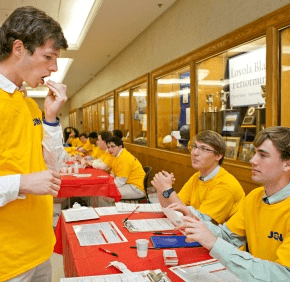 By Maria Wiering
mwiering@CatholicReview.org
TOWSON – Young men in bright goldenrod T-shirts with “Join for Joe” in blue manned the registration tables April 29 for what has become Loyola Blakefield’s annual bone marrow donor drive. They handed participants two cotton swabs – one for the inside of each cheek – and collected the specimens for lab processing.
Be the Match, the U.S. bone marrow donor database, uses mouth cells to identify potential matches for bone marrow transplants. Already, four matches have come from Loyola’s drives.
Bone marrow donation can be lifesaving for people fighting leukemia and other blood cancers, sickle cell anemia and other diseases.
However, as Loyola’s seniors know all too well, a transplant isn’t always a cure.
Their classmate, Joe Gorman, died from leukemia in 2011, their freshman year. When he was fighting cancer, his classmates rallied around him and sought a bone marrow donor through the first “Join for Joe” drive in August 2010. People registered in droves.
The drive didn’t produce Gorman’s match, but one was found, and he received a transplant. Despite the donation boosting his chance of survival, Gorman died a few months later.
Gorman’s loss galvanized his classmates’ commitment to expanding the national donor database through the There Goes My Hero Foundation, which focuses on matches for leukemia patients.
Seniors Dan McLoughlin, 18, and Danny Finley, 17, who befriended Gorman in middle school, led this year’s drive.
Since donors must be 18 years old, this year’s Join for Joe drive was the first time many of Gorman’s classmates were able to register, although they’ve been active promoters. Gorman’s sister, Julianna, also helped to coordinate a drive in May at Towson’s Notre Dame Preparatory School, were she’s in seventh grade. The two drives this year added almost 300 potential donors to the registry.
At Loyola, Gorman’s brother, Nick, a junior, will lead next year’s drive.
“The community’s been really supportive,” said Nick Gorman, a parishioner of Our Lady of Perpetual Help in Ellicott City. “It means a lot that we can keep his legacy going even years after his death.”
For some of his classmates, Gorman’s absence felt more pronounced as they passed milestones approaching their June 1 graduation. At their junior year ring ceremony, a ring was blessed in his honor.
“At that moment you really felt it a lot,” said McLoughlin, a parishioner of St. John the Evangelist, Hydes, who plans to attend the College of the Holy Cross in Worcester, Mass. “Joe was just like any of us. He was just another Don.”
Friends remember Gorman as a “great guy” – invariably selfless and positive – who was an avid sports fan.
“There are going to be people like Joe looking for matches that we want to help,” said Finley, who attends St. Mark, Catonsville and is headed to Tulane University in New Orleans. “Being able to know that we are going to be able to help those people drives this cause.”
McLoughlin hopes Join for Joe also raises awareness about leukemia and inspires others to start new drives.
“The huge Catholic overlying principle is helping your neighbor and treating them as yourself,” Finley added. “Joe exemplified that, and we’re trying to put that into action here by helping our neighbors out and unifying our community behind that cause.”
Senior Kevin McCoy, 18, founded Join for Joe with Finley and McLaughlin and said he “felt relieved that I can finally do it,” as he filled out paperwork to register his marrow.
“It’s a great way to help someone out in his memory,” said McCoy, a parishioner of the Cathedral of Mary Our Queen in Homeland who is bound for Boston College. “(Loyola) always teaches us to be a man for others, and I see signing up for the registry as a perfect example. … You’re putting yourself out there and giving something that’s yours without asking for anything in return.”
Also see:
Volunteering with Refugee Youth Project has lasting impact on NDP students
Class of 2014 spreads Xaverian charism at Mount St. Joseph
PrevNext