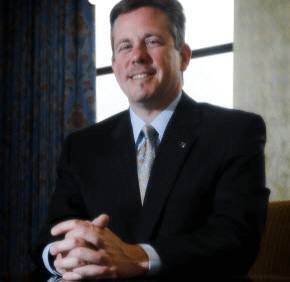 By Catholic Review Staff
Loyola Blakefield’s board of trustees unanimously voted to appoint Anthony I. Day as president, the Towson school announced Sept. 25.
In addition, The Maryland Province of the Society of Jesus named Day director of the work, responsible for Loyola’s Ignatian mission, according to the school. Both appointments are effective immediately.
Day’s appointment comes after the board conducted a national search for the next president.
Day served as Loyola’s principal from 2008 until he was named interim president in March. Before coming to Loyola, he taught and was an assistant principal at schools in New Jersey and New York.
He earned a bachelor’s degree in English from St. Peter’s University in Jersey City, N.J., a master’s degree in education from Fordham University in Bronx, N.Y., and a master of letters from Drew University in Madison, N.J.
“I am delighted that the Loyola Blakefield board of trustees has named Mr. Anthony Day as its next president,” Jesuit Father James M. Shea, provincial of the Maryland Province, wrote in a statement. “I am grateful for their sustained commitment to good leadership. Mr. Day has a long history with the Ignatian mission in our schools, has proven his competence with years of experience in Jesuit education and has demonstrated his conscience and compassion in his time as principal and interim president.”
John H. Weetenkamp III, a 1965 Loyola graduate, served as the school’s interim president for most of the 2012-13 school year. Weetenkamp was named interim president after Jesuit Father Thomas A. Pesci, who served as Loyola’s president for seven years, left the school in June 2012.
Follow Anthony Day on Twitter here.
For more articles on Catholic education, click here.
PrevNext