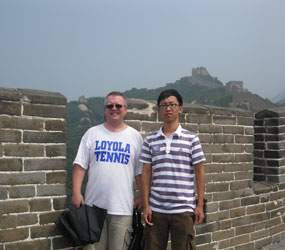 Three English teachers at Loyola Blakefield enjoyed the summer of a lifetime, as they immersed themselves in the cultures of Russia and China.

Sean Flanigan and Rachel Wilkinson were selected to participate in a Fulbright-Hays Study Tour in Russia, while Tom Durkin, chair of the English department, participated in the Jesuit Secondary Education Association teaching program in China.

Flanigan and Wilkinson spent four weeks during June and July in Krasnodar and Moscow with 11 other teachers from across the country. The “Understanding Contemporary Russia” proram was sponsored by the University of Michigan’s Center for Russian, East European and Eurasian Studies.

The visitors participated in Russian language classes and lectures on a variety of topics, including economics, ecology, politics and religion. Classes were held in English, or in Russian with an English translator. The goal was for the teachers to create curriculum units about Russia, to use in their classrooms and share with other teachers.

“I’ve read a lot of Russian literature, but I’ve never taken a course in Russian literature,” said Wilkinson, who teaches 10th-, 11th- and 12th-graders. “I had been thinking about it when John McCaul (a Loyola administrator) forwarded me the information about the program.”

The visiting teachers also had the opportunity to learn about the culture, visiting various institutions and living with Russian host families.

“Now I can speak with greater authority and a lot more understanding and enthusiasm,” Wilkinson said of his subject matter. “I look forward to teaching Solzhenitsyn, Gogol, Chekhov and Tolstoy.”

Wilkinson, one of a few vegetarians in the group, was pleasantly surprised about the food.

“I honestly can say I have never eaten better,” she said. “The fruits and vegetables are incredibly fresh, local and organic – just phenomenal. They went out of their way to make sure we had something to eat. It showed how especially welcoming the Russians were. Even though they don’t really have vegetarians there, it showed they were ready to adapt to our culture.”

Neither Wilkinson nor Flanigan knew Russian.

“It is an extremely difficult language,” said Flanigan, who teaches British Literature and Literary Criticism. “The young people speak English very well, they begin in second grade. Their English is much better than our Russian,”

Across the border, Durkin spent six weeks teaching in China. A Loyola teacher for 20 years, Durkin chronicled his first visit there with a blog on the school’s Web site (loyolablakefield.org).

“I chose to do a blog from China for two reasons,” Durkin wrote in an e-mail from Xiamen, China. “Initially, I wanted to share my experiences. Secondly, I want my students at Loyola and in China to learn to use blogs as an educational tool.”

“I also think it would be beneficial,” he said, “if we had our students directly communicate with the Chinese students so that they can share their educational experiences. Kids learn from kids.”

He taught at Xiamen School No. 6, residing in its dormitory.

“I don’t know if I met the standard of masculinity Chairman Mao was referencing, but I sure felt great!”

Durkin’s last blog entry from China was on July 28.

“I am blessed to be a teacher. It is said that a school is a building with tomorrow inside,” he wrote. “I have touched and been touched by tomorrow in both America and China.”