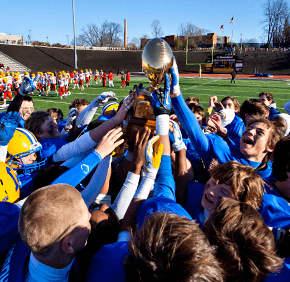 TOWSON – Loyola Blakefield had to work overtime Thanksgiving Day, but the extra effort required in the Dons’ 21-20 win over Calvert Hall in the 94th annual Turkey Bowl made it even more fulfilling.

Junior Jake Nordhausen blocked Jake Soriano’s point-after attempt to seal victory in what is believed to be the second overtime game in the history of the storied series. It set off a wild celebration for the Dons on Minnegan Field at Johnny Unitas Stadium, on the campus of Towson University.

Loyola Blakefield started the overtime, in which both teams get four downs from the opponents’ 10-yard line, with Damon Hazelton’s 6-yard touchdown run and Gavin Rowley’s point-after.

Calvert Hall answered with a 9-yard touchdown pass from Kenji Bahar to Erik Evans. Nordhausen easily broke through the Cardinals’ offensive line, as he didn’t need all of his 6-foot-4-inch length to end the Dons’ four-game losing streak to their rival, their longest in the series in nearly three decades.

The two teams entered the game with a combined five wins, but an announced crowd of 7,709 witnessed Loyola Blakefield warm itself on an otherwise frigid morning.

“It’s been a long year,” said Dons’ coach Brant Hall (’98). “We came in 2-8. All week, it was, ‘We can’t do anything about the record, but we can do something about this game.’ If we win this game, a lot of the season goes right out the window. These guys came out and did it, they got the job done.”

Loyola Blakefield had 178 yards rushing to 24 for Calvert Hall, as Hazelton carried 18 times for 155 yards and two touchdowns. The first came midway through the third quarter, on a 66-yard run that tied the game and essentially forced the overtime.

Loyola took the opening kickoff and marched 80 yards, with quarterback Van Evans scoring on a 2-yard sneak with only 3:38 elapsed. On the ensuing kickoff Calvert Hall bungled the Dons’ squib kick, but the victors awoke a few minutes later with a series of big plays.

On fourth-and-2 from the Cardinals’ 24-yard line, Evans rolled right but was sacked and stripped of the ball by Kevin Nickel. Juantez McRae scooped it up and returned the ball 71 yards for a touchdown.

Four plays later, Nick Smith blocked a Loyola punt and Calvert Hall recovered on the Dons’ 3-yard line. On its first offensive play, with 3:22 remaining in the first quarter, the Cardinals went ahead 14-7 on a run by Nickel.

Bahar completed 11 of 19 pass attempts for 103 yards, but had two intercepted, offsetting the Dons’ early mistakes.

“We have been consistent, making these same mistakes and shooting ourselves in the foot all year long,” Hall said. “We’ve lost a lot of games because we turned the ball over, put our defense in some bad situations, and the first half, we that same thing.

“At halftime, we said, ‘Let’s forget about what happened and play a perfect second half.’ We made mistakes, but fought hard to the last whistle. We were blessed with a win today.”

Check out the Catholic Review’s next Inside Sports segment for a more in-depth look at Calvert Hall.