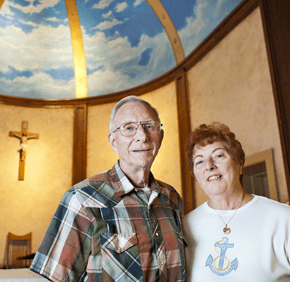 By Elizabeth Lowe
elowe@CatholicReview.org
ABINGDON – Wherever Deacon Richard J. Stine goes, his wife, Blanche, isn’t far behind.
“We happen to like the same things and do them together,” said Deacon Stine, 79.
Parishioners of St. Francis de Sales since 1961, the Stines have been involved with nearly every ministry there. Now they are moving to Arcadia, Fla., preparing for the next chapter of their lives.
The parish had a special blessing for the couple at a June 7 Mass, followed by a reception.
“This is like another house to us,” Deacon Stine said a few days prior to that celebration, sitting in a pew in the parish’s stone chapel and motioning to the sanctuary.
“We’ve been so much a part of what’s going on here,” said Blanche, 77.
She said that someone else will take charge and fill their shoes, but Father Charles M. Wible, pastor of St. Francis de Sales, acknowledged that they leave behind a void.
“Richard and Blanche are the type of people that if you have a need, they’re there,” he said. “When you get Richard, you get Blanche.”
Father Wible will remember the couple’s kindness.
“They are salt of the earth, kind, giving people,” he said. “They were always there and willing to pitch in.”
Ordained in 1986, Deacon Stine was the parish’s only deacon for 17 years. He retired in 2010, but has continued in active ministry.
Over the years, Deacon Stine coordinated pastoral visits to the sick and homebound, and the parish baptismal and marriage preparation programs. He also refurbished the crucifix in the parish’s chapel and taught religious education classes.
Blanche was the parish’s first paid secretary and its first woman to serve as an extraordinary minister of holy Communion. She has sewed and mended countless vestments for the parish’s clergy and her husband of 57 years.
“I like to sew,” she said. “It’s my hobby.”
In addition, Blanche sewed wall hangings, three sets of altar cloths and the stoles and dalmatics for the deacons ordained for the Archdiocese of Baltimore in 2003.
Together, the couple visited nursing home and hospice patients, and organized Seder meals.
Sandy Gill, the parish’s office manager, described the Stines as “spiritual, energetic and devoted.”
“They’re dedicated to each other and they do their ministries together,” Gill said. “They work hand-in-hand. As a couple, it’s a beautiful thing.”
When the Stines weren’t at the Abingdon parish, they were likely square dancing, which they began doing in 1976 and carried well into the new millennium.
“We’ve been busy little bees,” said Deacon Stine, who retired in 2000 after a 41-year career as a computer engineer.
In Florida, the Stines don’t plan to take on too much at once.
“We’ll see what the Lord has in store for us,” Blanche said.
The Stines’ tips for a fulfilling retirement
1.     Nurture a hobby
“You never retire into nothing, you retire into something.” – Deacon Stine.
2.     Socialize
“You don’t just sit in your room and look at television.” – Deacon Stine.
3.     Volunteer
“You have to volunteer some place. Then you have a purpose. You need a purpose in life.” – Blanche Stine
Also see:
Orioles pitcher Tommy Hunter successfully closes on his Catholic faith
Will you pray for me? Hundreds of prayer requests do not go unanswered
St. Pius X youth honored at Eagle of the Cross ceremony
PrevNext