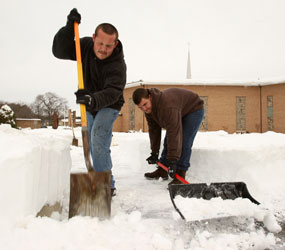 Two heavy snowfalls in the span of six days have made for the snowiest winter in Maryland history and created a number of cancellations and postponements in the Archdiocese of Baltimore.

For only the second time in the event’s 26 years, the Maryland Catholic Conference has canceled Lobby Night, which was scheduled for Feb. 15 in Annapolis. The MCC made the decision due to ongoing concerns about driving and pedestrian conditions in and around the state capital.

Information on alternative ways to reach legislators will be made available at www.mdcathcon.org Feb 12.

Two events connected to Black History Month, the Feb. 12 Mother Mary Lange awards banquet at Martin’s West and the Feb. 13 11:30 a.m. Mass honoring the 25th anniversary of the Harambee organization at the Basilica of the National Shrine of the Assumption of the Blessed Virgin Mary in Baltimore, will not be held as planned.

Information about possible rescheduling of the two events was not available.

The archdiocesan development office, meanwhile, after conferring with Archbishop Edwin F. O’Brien, has delayed two important weekends in the Archbishop’s Annual Appeal. Commitment weekend has been moved back to Feb. 20-21, and follow-up weekend will be Feb. 27-28.

Monsignor J. Bruce Jarboe was to be installed rector of the Cathedral of Mary Our Queen at a Saturday Mass. His installation has been moved to March 21, at the 11 a.m. Mass.