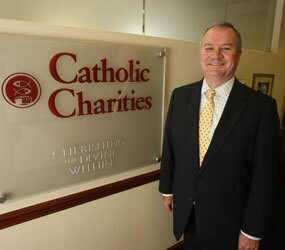 But he wasn’t complaining because he knew his situation was just a temporary setback, unlike the people who struggle with it every week.

McCarthy took the Maryland Hunger Solutions Food Stamp Challenge the week of Jan. 24, living on the average food supplement of $30 per week per person.

“People don’t realize how little the food stamp allotment is,” he said.

His carefully planned meals included a dinner of a half a cup of rice, a carrot and half a can of pork and beans. Breakfast the next morning was two eggs and toast with peanut butter.

Halfway through the week, he told the Catholic Review, “I realized I don’t have meat and I don’t have fruit.” Not only did he find it hard to eat a balanced diet, he also had to think about every penny.

“You could never buy a bottle of water or a cup of coffee,” he said. “I never thought about how little the food supplement was.”

McCarthy undertook the challenge to better understand the clients Catholic Charities serves and to demonstrate concern about the rising numbers of people needing assistance.