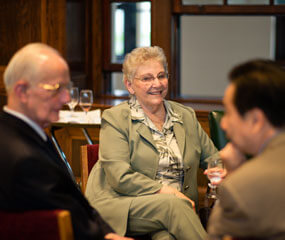 As the Little Sisters of the Poor continue on a major renewal campaign to raise funds to reconstruct the 40-year-old St. Martin’s Home in Catonsville, where they reside and care for the elderly, they are making a change in how they ask for money.

According to Little Sister of the Poor Rosemary Rese the community’s collection sister, the religious order is now looking to large gifts and pledges to keep construction moving forward at St. Martin’s Home. Traditionally, the sisters relied on begging at churches and other public settings to raise funds, but those methods are insufficient when trying to cover the cost of re-design and reconstruction, Sister Rosemary said.

The Little Sisters organized a campaign event May 18 at St. Mary’s Seminary in Roland Park to thank supporters and encourage continued donations.

The Little Sisters’ Caring today, Building tomorrow capital campaign has a first-phase objective of $14.5 million and an ultimate goal of $25 million.

Among the close to 150 attending the event were Maryland Comptroller Peter Franchot and the sponsors of state legislation that provides $500,000 for the replacement of St. Martin’s antiquated air-conditioning system and $250,000 for its time-worn boilers – Baltimore County Senator Edward Kasemeyer and Delegates Steven DeBoy and James Malone, and Anne Arundel County James “Ed” DeGrange. St. Martin’s is also the beneficiary of a $5 million foundation gift and several pledges of $1 million.

Cardinal William H. Keeler, honorary chairman of the Caring today, Building Tomorrow campaign, gave “thanks to all those who have contributed and will contribute to this very special effort.”

He said the care provided at St. Martin’s is unmatched by other facilities of its kind.

“My prayer is that this renewal will match in bricks and mortar the extraordinarily high quality of loving, compassionate care provided to our area’s elderly poor by the Little Sisters,” the cardinal said. “The residents of St. Martin’s deserve no less.”

The campaign event was hosted by Sulpician Father Thomas R. Hurst, president rector of St. Mary’s, and sponsored by CAM Construction of Timonium. Guests were entertained by the Calvert Hall Jazz Combo.

To support the Little Sisters’ campaign, contact Sister Rosemary at 410-744-9367