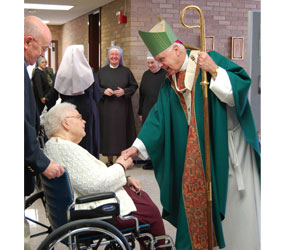 CATONSVILLE – After three thwacks with a gold-colored hammer, Mother Celine de la Visitation still couldn’t poke a hole in a wall at St. Martin’s Home for the Aged.

One mighty, fourth swing finally did the trick Oct. 22, as the smiling worldwide superior for the Little Sisters of the Poor sent bits of wall flying and symbolically ushered in a new era for a Baltimore institution.

St. Martin’s has begun a major $25 million restoration that will provide a sprinkler system throughout the 200,000-square-foot building. The mechanical, electrical, lighting and plumbing systems will be upgraded, and residential space will be reoriented to provide brighter, more spacious bedrooms.

A new “main street” will be established within the building, providing a social hub for the community. For the first time, physical therapy will include an area for exercise and wellness for active residents.

Archbishop Edwin F. O’Brien, who celebrated a Mass for the community following the wall-breaking ceremony, said the start of the reconstruction project represented a “great celebration” for St. Martin’s, the Little Sisters and the entire archdiocese.

St. Martin’s provides a home for people age 60 or older of limited means.

“It’s a privilege that they are here,” the archbishop said of the Little Sisters. “They’ve pledged themselves in this major undertaking to remain here.”

Mother Loraine Marie Clare, provincial leader of the Little Sisters, said St. Martin’s is one step closer to providing an even better home for the people it serves.

“We have trust God is with us,” she said.

Michelle Moran, St. Martin’s associate director of development, said that although there have been upgrades over the decades, the current effort represents the first major construction at the home since it was built in 1969.

Providing a “main street” will open a corridor through the center of the building, she said, allowing a visitor to see the stained glass windows of the chapel from the entrance of the building. Large new windows will allow in much more natural light, she said.

“We would like to eventually open the main street activities for the local seniors who may need some supplemental care, but who are still living on their own,” Moran said.

Including the Little Sisters who minister at St. Martin’s, there are 76 people who live at the home. The Little Sisters of the Poor have cared for an estimated 15,000 elderly men and women in Baltimore since 1869, when they opened a home on Calvert Street.