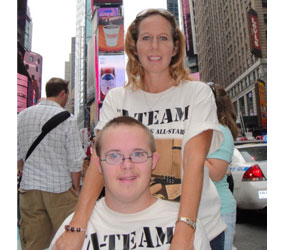 Nineteen-year-old Alex Hudson is your typical teenager. He goes to high school, has a part-time job, plays sports year-round and loves mixing music — sometimes very loud music — on his laptop. But what sets Alex apart from the rest of this year’s graduating class at Kenwood High School in Essex is that he was born with Down syndrome.

“When people get to know him, they see that he is more alike than he is different. He likes the same sports, the same music,” said Alex’s mom, Nicol Hudson, who works at the Catholic Center as a systems analyst for the Archdiocese of Baltimore. “We’ve always tried to get him included as much as possible in school.”

Alex is involved in a Baltimore County Public Schools program at Kenwood where he goes to school in the morning and then to his first paying job doing maintenance at Orems Elementary in the afternoon. He is also part of the Allied Sports program at Kenwood, where he plays soccer, bowling and softball.

In addition to programs at school, Alex is a member of The Bright Side Group for teenagers at Kennedy Krieger Institute, and each summer he attends Camp PALS for kids with Down syndrome. Hudson and her husband Chip will soon meet with school officials to determine Alex’s college program options after graduation.

“You have to push boundaries. These kids don’t belong in the back of the bus or the back of the classroom. I think it’s important,” said Hudson, who pushed for Alex to be in a classroom with typical students rather than secluded in a special needs classroom. “I want him to go to school with the kids in the neighborhood; to get him involved as much as possible; to allow him to achieve his goals — whatever he wants to do.”

Hudson found out three days before Alex was born that he had Down syndrome. Although prenatal testing is usually done on older mothers, Hudson, then 23, had an amniocentesis performed because her doctor had other concerns.

According to the National Down Syndrome Society (NDSS), one in every 691 babies is born with Down syndrome. In the U.S., there are more than 400,000 people living with this condition, which occurs when a person has three rather than two copies of the 21st chromosome. Some characteristics of Down syndrome are cognitive delays, increased risk of certain medical conditions such as congenital heart defects, and physical traits such as small stature, low muscle tone and slanted eyes.

According to Hudson, statistics show that 90 percent of people with a prenatal diagnosis of Down syndrome abort. “A lot of the medical community still has such a dim picture of what life can be like,” she said.

“It’s sad to think even during this day and time I still hear from expecting mothers who receive such disturbing advice from their doctors regarding what life is like for someone with Down syndrome or for the family raising them,” said Hudson.”With all the advancements in prenatal testing it’s almost as if eugenics will soon exist and the world won’t be graced by people like Alex and so many others.”

Hudson is a member of several online support groups, such as the Chesapeake Down Syndrome Parent Support Group. She also helped to create the International Down Syndrome Coalition for Life with a group of mothers from an online message board who shared the same Catholic values for life.

“We all had the same concerns about the abortion rate and misinformation out there. We’re out there to tell people that their children with Down syndrome can live full lives. It might lead you down a different path from what you wanted for your child, but it can be a very rewarding path,” she said.

“I’m on the blogs all the time. A lot of the parents have younger kids. They need to know that life can be normal,” said Hudson.

“I didn’t have these great support groups and message boards when I received Alex’s diagnosis. While I am so far from the baby stages, I love reaching out to all moms to show them what the future holds for their children,” she said. “It’s been an amazing ride raising Alex.”