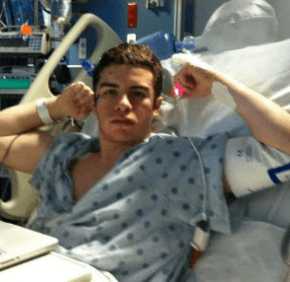 By Catholic Review Staff
UPDATED 8:50 a.m. March 13, 2014 Zachary Lederer, whose courage in the face of cancer inspired admirers from his Howard County parish to the college basketball world, died at age 20 March 11.
Lederer was a parishioner of Church of the Resurrection in Ellicott City, where his mother, Chris, is an accountant. Diagnosed with cancer at age 11, he was a manager for the University of Maryland men’s basketball team in January 2012, when, after brain surgery, he struck a triumphant strongman pose that went viral and became known as “Zaching.”
The university was among those paying tribute to Lederer after the news of his death was reported. According to The Sun, a candlelight vigil was held in his memory on the College Park campus late on the evening March 11.
Resurrection-St. Paul School was among the many institutions and individuals which made tributes to Lederer. The school community posted a photo of the student body “Zaching” in January.
“The whole Zaching thing has meant so much to the family,” Ruth Puls, a family friend who works for the Archdiocese of Baltimore, told the Catholic Review in January.
A funeral Mass for Lederer will be offered at Church of the Resurrection March 21 at 3 p.m.
See also:
‘Zaching’ continues to inspire, while founder in hospice care
To read personal stories about how Lederer inspired those fighting cancer, see the Zaching Against Cancer Facebook page
PrevNext