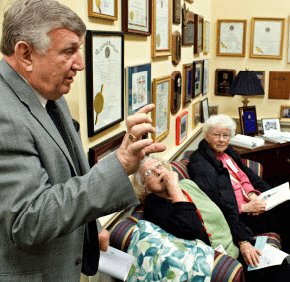 In the wake of the Feb. 23 Senate passage of a bill legalizing same-sex marriage, the leader of the Maryland Catholic Conference vowed to work to bring the measure to the people for a vote.

“I expect that the people of Maryland will be outraged at the manner in which this legislation has been rammed through the Legislature,” Russell told the Catholic Review, “and that they will be all the more inspired to do everything necessary to ensure the opportunity to vote in support of traditional marriage.”

The Senate passed the measure on a 25-22 vote after deliberating just 48 hours. The House of Delegates had already approved the bill earlier this week and Gov. Martin J. O’Malley, sponsor of the controversial measure, has pledged to sign it quickly into law.

“It’s a grave disappointment that the governor would use the power of his office to promote a measure that has such deep, significant moral consequences for all of us in this state,” Russell said. “This should have been a vote of conscience, but – especially in the House of Delegates –  lawmakers were under incredible pressure to pass this measure.”

The Maryland Catholic Conference, which represents the state’s Catholic bishops, argued that stripping marriage of its unique connection to parenthood erases from civil law the right of a child to a mother and father.

Cardinal Edwin F. O’Brien spoke out against the bill forcefully on many occasions. After the House of Delegates voted 72-67 to pass the bill Feb. 17, the cardinal said lawmakers “moved our state one step closer to undoing what civilizations surely have upheld for thousands of years, one step closer to violating a law deeply embedded in human nature, with tecton­ic repercussions for the future of family life and the common good of all.”

“Neither the church nor the state,” he said, “has the right to alter the life-giving union created by God for the benefit of all society … this even for an attractive but fleeting goal for profitable political gain.”

More than 55,000 signatures will need to be collected to bring the measure to referendum at the November election –  a number Russell believes will easily be obtained. The Maryland Marriage Alliance will be working to collect those signatures and Catholic parishes are expected to be a major force in the drive.

“We will be working very closely with the Maryland Marriage Alliance,” Russell said. “I anticipate that our churches will get involved and a number of our parishes will enthusiastically embrace the effort to collect signatures.”

Maryland will join Massachusetts, New York, Connecticut, Iowa, New Hampshire, Vermont, Washington state, along with the District of Columbia, in allowing same-sex couples to marry when the bill is signed into law.

Stay with the Catholic Review for ongoing coverage of this breaking story.