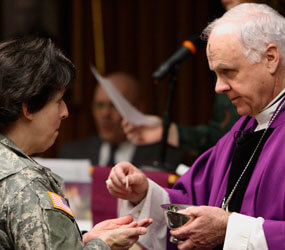 Leaders throughout the Archdiocese of Baltimore and around the country expressed joy in Pope Benedict XVI’s elevation of Archbishop Edwin F. O’Brien to the rank of cardinal. Many called the move a sign of the pope’s confidence in the cardinal-designate’s leadership and a tribute to his many decades of service to the church.

Cardinal William H. Keeler, Cardinal-designate O’Brien’s predecessor as archbishop of Baltimore, said the people of Baltimore are “thoroughly delighted” by the appointment.

Mary Ellen Russell, executive director of the Maryland Catholic Conference said Cardinal-designate O’Brien “could not be more deserving” of the honor.

“Cardinal-designate O’Brien has been a vocal and passionate advocate in the public square, and a highly regarded champion of the poor, the unborn, the immigrant, the prisoner on death row, the importance of marriage and the family, and the rights of students in our Catholic schools,” Russell said.

Dr. Marie-Alberte Boursiquot, president of the Baltimore Guild-Catholic Medical Association, called Cardinal-designate O’Brien a “stalwart defender of the faith.”
“I believe that he would literally shed his blood for the church of Christ,” she said. “He has consistently demonstrated compassionate pastoral leadership in matters pertaining to the challenges which confront Catholic physicians and other health care professionals in the practice of medicine.”

Monsignor Adam J. Parker, Cardinal-designate O’Brien’s priest-secretary, was on an Alabama tree farm Jan. 3 for a seminary reunion when he received a call with the news.

“I told the archbishop I was standing on a knoll with my cell phone in my left hand and holding onto a tree,” Monsignor Parker said, noting that the archbishop sounded absolutely overjoyed about the news, “like a kid on Christmas morning.”

“He has given his life in service to the church for decades,” Monsignor Parker said. “He has a sincere and profound faith in the Lord and a dedication to the church, which is a prime quality we would look for in any cardinal.”

Similarly, Bishop Mitchell T. Rozanski also received a personal call and has always been impressed with the cardinal-designate’s lifetime of service.

“All of that has really gone together to form who he is today and that is a person who seeks to serve God and his church,” Bishop Rozanski said.

In the College of Cardinals, Cardinal-elect O’Brien will be a powerful representative for the people of the Holy Land, according to Bishop Denis J. Madden.

“They need a strong voice,” said Bishop Madden, who has ministered in the Holy Land. “The church is being persecuted there.”

Dr. Diane Barr, chancellor of the Archdiocese of Baltimore, said Cardinal-designate O’Brien’s work with Catholic schools is been studied in dioceses across the country. He is also well regarded for launching a new parish planning process, she said.

“He’s shown great concern for the priests,” Barr said. “That’s been really important to him.”

Jo Ann Redmond, director of administration for the Archdiocese for U.S. Military Services, worked with Cardinal-designate O’Brien for 10 years.

“His heart is as big as the outdoors,” she said. “He’s firm when he needs to be, but generous and loving.”

Archbishop Timothy Broglio, who succeeded Cardinal-designate O’Brien as head of the military archdiocese, said his predecessor’s “outstanding leadership qualities and professional preparation will be of immense benefit to the College of Cardinals and the Church at large.”

Archbishop Joseph Kurtz, vice-president of the United States Conference of Catholic Bishops, said Cardinal-designate O’Brien’s experience with the military has made him a valuable consultant on the USCCB’s justice and peace efforts.

While many expressed excitement for the cardinal-designate’s new honor, they said he will be missed in Baltimore. The New York native is currently serving dual roles as apostolic administrator of the Baltimore archdiocese and grand master of the Knights of the Holy Sepulcher of Jerusalem in Rome. After the next Baltimore archbishop is named, Cardinal-designate O’Brien will minister solely with the knights.

“We’re absolutely elated for him and we’re praying for him,” said Estella Chavez, one of Cardinal-designate O’Brien’s secretaries. “I just hope the pope takes his time (naming a successor).”