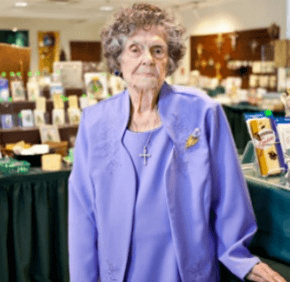 Mary Portera, a fixture at the St. Jude Shrine in Baltimore who one priest described as the “example of what a Catholic layperson should be,” died Jan. 17. She was 101.

In addition to the above high praise, Pallottine Father Louis Micca, who served as pastor of St. John the Baptist Parish, the shrine’s predecessor, from 1982 to 1985, also referred to Portera as “one of those people you meet once in a lifetime and feel privileged just to be assigned where she was.”

A lifelong Baltimore resident, Portera has been intensely involved with the shrine and its predecessor since about 1923, when she was nine years old.

Her daughter, Mary Gerk, business manager of the shrine, said that her mother was confirmed at the church and attended Mass there throughout her life.

“Her mother used to scrub the altar, clean the altar linens and clean the church,” Gerk said. “She took my mother along to start doing those things.”

As she grew older, Portera, a homemaker, served on “all the committees,” her daughter added.

What began as cooking dinner for the priests evolved into a much wider scope of services for the church, including multiple odd jobs. Portera launched the shrine’s gift shop, which started as “a little table with rosaries and medals” located in a church vestibule, remembered Gerk.

She also organized the busloads of pilgrims that came to pray to St. Jude.

“She was very outgoing and loved to meet new people,” Father Micca said, noting that her disposition was perfect for interacting with pilgrims.

“She had very much to do with the ongoing growth of St. John becoming the St. Jude Shrine,” Father Micca added.

Gerk said her mother “never wore her religion on her sleeve” but “always had the greatest faith” and believed fervently in the power of prayer, especially frequent and intense prayer.

“She said at least two rosaries a day,” Gerk remembered.

Portera frequently practiced the charitable works of mercy, too.

“She wasn’t by any means wealthy,” Gerk said, “but if she had five dollars and heard you needed it, she would probably give it to you.”

When a family needed food or clothing Portera would organize an effort to put a basket together, if she didn’t simply donate the goods herself. She visited the sick.

“She never drove in her life, but she would get us to take her to see people that needed it,” Gerk remembered.

Portera worked at St. Jude Shrine seven days a week until about 12 years ago, when Pallottine Father Frank Donio, then the pastoral director, gently cut her down to three days.

“She was ticked off,” Gerk said with a laugh.

She noted that her and her mother’s working lives completed a circle.

“I worked with her, and as time went on, I became her boss,” Gerk remembered. “We gave each other grief, but we always got along.”

When Portera stopped her work completely about a year ago, “she called me every single day at 12:30, when my lunch was over,” her daughter remembered. “If she didn’t, I was very disappointed.”