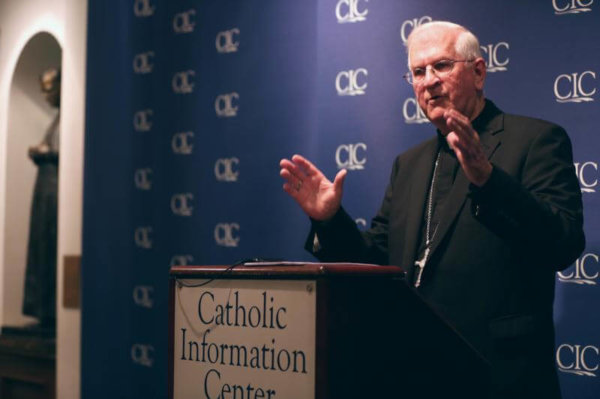 WASHINGTON — The chairman of the U.S. bishops’ Committee for Religious Liberty told a Washington audience Sept. 12 he is concerned about a “steady movement” in the U.S. away from religious institutions and an erosion in the view that religious liberty must be valued.

The public-private partnership of the government and the church is necessary to serve all people’s needs, said Archbishop Joseph E. Kurtz of Louisville, Kentucky.

He reviewed a number of current challenges to religious liberty, including an effort to exclude Catholic agencies from providing adoption and foster care services over the issue of same-sex couples.

Before his main address at the Catholic Information Center, Archbishop Kurtz commented on the current abuse scandal in the church, in particular the credible allegations of child sexual abuse committed by Archbishop Theodore E. McCarrick, the former cardinal-archbishop of Washington. He also has been accused of sexual misconduct with seminarians.

“I felt angry, I felt hurt, and I felt embarrassed” over the revelations about Archbishop McCarrick, he said. “We’ve worked hard in trying to make sure young people … would be safe.”

Archbishop Kurtz, who is immediate past president of the U.S. Conference of Catholic Bishops, said he’d not heard any previous rumors about Archbishop McCarrick’s behavior. “I didn’t have a clue,” he told the gathering.

The archbishop also told Catholic News Service that he doesn’t know details about the plans for a religious liberty task force established by Attorney General Jeff Sessions. Archbishop Kurtz attended the July announcement of the task force and spoke there about how important religious liberty is to the country, saying such liberty is “rooted in the dignity of the human person.”

As for his future involvement in the task force, “that’s an activity of the Justice Department,” he told CNS.

Sessions had called the task force a way of “making sure that our employees know their duties to accommodate people of faith.”

In his Sept. 12 remarks, Archbishop Kurtz talked about the recent exclusion of Catholic Social Services in Philadelphia from being able to provide foster care services. He criticized government agencies for “asking them to give up their notions of what a family is, or to give up their care. It really makes no sense to reduce, at this point in our history, the number of agencies providing this care.”

Currently, “there are over 400,000 children in the foster care system, and over 100,000 more kids awaiting adoption. The opioid crisis in the United States is increasing those numbers daily.”

“We are asking for the space to serve others with integrity,” Archbishop Kurtz said in his prepared remarks. “The church certainly envisions a distinction between church and state, but not a wall of separation that does not permit healthy and good relations.”

“There’s no theological reason that the church and state cannot work together in good partnerships. Our country is much richer because of public-private partnerships that work well”

He criticized the “steady movement in our culture away from religious institutions” and the idea that “faith is something that has to be kept private,” and that “there can’t be a public dimension without being accused of bigotry.” He also noted the “steady erosion of people seeing religious liberty as something of great value.”

Religious liberty, he said, “is captured in the dignity of the individual person.”

To be effective at spreading that message requires “courage, compassion and civility,” plus calm, the archbishop said. “If you believe power rules, then you can simply shout down your opponent.” It takes “a humble capacity in order to be able to listen. Irrational rage gets us to look at something that otherwise we can ignore, but when the fire is raging, we need a calm voice,” he added.

“We are grateful to live in a nation that seeks the truth rather than impose the truth on others,” he concluded.