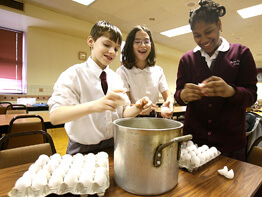 Fried coddies, crab cakes and homemade salads sell quickly during the Home & School Association annual fundraiser at Father Kolbe School, Canton. The school is coordinating their 10th annual Lenten Homemade Food sale, which began March 1 and runs through April 3. Chefs include students, parents, parishioners of St. Casimir in Canton and friends. Buyers hail from as far away as Pennsylvania and Maryland’s Eastern Shore.

Chairperson Mary Miller, a school parent and member of the association, said “this has become a true social engagement not only for those making the food, but also for those who return each year (to buy).” She reports as the sale continues through the six weeks of Lent, the orders grow. Last year, 1,300 coddies were purchased for Good Friday, and the fundraiser earned $18,000. Frying begins at 4 a.m. each week. Potato salad, macaroni salad and cole slaw sell for $2 per pound; fried and unfried codfish and crab cakes sell from $1.75 to $5 each. For ordering information call Mary Ann Frank at 410-342-9052.