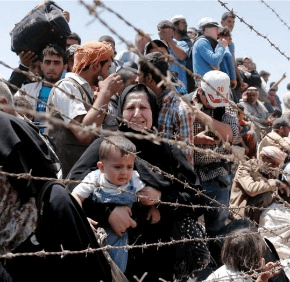 By the Knights of Columbus

Special to the Review
The Knights of Columbus, the world’s largest Catholic fraternal organization, has donated $500,000 to Baltimore-based Catholic Relief Services (CRS) to support the Jordanian Catholic Church’s schooling of Syrian and Iraqi refugees in that country.

The check was presented Nov. 15 to CRS CEO Carolyn Woo by Knights of Columbus Supreme Knight Carl Anderson in Baltimore. The donation will provide education to many hundreds of Syrian and Iraqi children – the latter mostly Christians who fled ISIS advances in Mosul and Nineveh.

The gift will support the expansion of programs in 18 Jordanian Catholic schools that provide refugees with a safe space to learn, heal from trauma and regain a semblance of childhood, while catching up to their grade level after years out of school. These kindergartens, primary and secondary schools work extra shifts of classes and tutoring sessions for the refugees.
“Having already sponsored food, housing and medical projects in the Middle East, the Knights of Columbus is pleased to partner with CRS in the important work of educating refugee children now living in Jordan,” said Knights of Columbus Supreme Knight Carl Anderson. “These children represent the future of Christianity in that region, and with the help of this education that future will be a brighter one.”
“Syrian and Iraqi refugees in Jordan have many needs, but the education of children is the most crucial for their future, and it is something the Catholic Church – with its strong network of schools in Jordan – is uniquely placed to provide” said Kevin Hartigan, CRS Regional Director.  “On behalf of the refugee children, CRS and the Jordanian Church are extremely grateful to the Knights of Columbus for this enormous gesture of solidarity to the most innocent victims of the horrible wars in the Middle East.”
Also see:
Refugee crisis: ‘My heart bleeds for this’
Church agencies highlight growing urgency of Europe’s refugee crisis
PrevNext