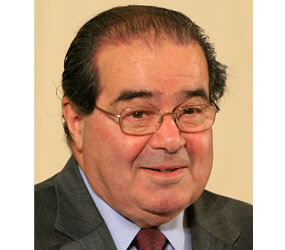 The St. Thomas More Society of Maryland will honor Antonin Scalia, associate justice of the Supreme Court of the United States, with its “Man for All Seasons Award” at an Oct. 21 banquet at the Westin Hotel, Annapolis.

The award will be presented following the 52nd annual Red Mass for judges, lawyers and others in the legal profession. Archbishop Edwin F. O’Brien will celebrate the Mass at 5:30 p.m. at St. Mary in Annapolis. Father Robert Kennedy, professor of canon law at The Catholic University of America, will preach the homily.

Scalia, a New Jersey native and practicing Catholic, was appointed Judge of the United States Court of Appeals for the District of Columbia Circuit in 1982. President Ronald Reagan nominated him as an associate justice of the Supreme Court, and he took his seat Sept. 26, 1986.

The custom for a special Mass for lawyers and judges has been celebrated since the mid-13th century to mark the annual opening of the courts and to seek the enlightenment of the Holy Spirit in court deliberations.

When the custom began, the celebrating priest wore red robes. Conforming to ecclesiastical tradition, the judges of the High Court of England also wore red robes, thereby inspiring the common name by which this votive Mass of the Holy Spirit is now known.

St. Thomas More was a 16th century lawyer, judge and diplomat who became the first layman to serve as Lord Chancellor of England, the country’s highest judicial officer. He was martyred under King Henry VIII and canonized in 1935. He is the patron saint of statesmen and politicians.