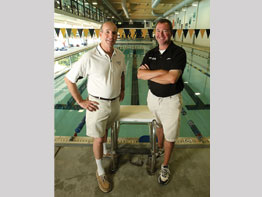 Nearly a million laps in a 50-meter pool have perfected the form and fitness of Michael Phelps, the star of the 2004 Summer Olympics and the presumptive ace of the 2008 games that begin Aug. 8 in Beijing.

While Phelps’ coach, family and 21st century Speedo swimsuit have been scrutinized, much less consideration has been given to an influence on the swimmer that is nearly half a millennium old.

July 31 is the feast day of Ignatius of Loyola, the Spanish soldier and saint who founded the Society of Jesus in the 16th century. The rigor applied by his Jesuit followers is reflected in the training environment that has turned Phelps into what most experts agree is the greatest swimmer of all time.

It has also has given women’s Olympic swimming a Loyola flavor, all manifested through the North Baltimore Aquatic Club.

The NBAC produced an Olympic gold medalist before Phelps, 23, was born.

The NBAC was created in 1967 by Tim Pierce and Murray Stephens, who had prepped at Loyola Blakefield, Towson, and earned their undergraduate degrees at Loyola College in Maryland.

Loyola Blakefield served as the NBAC’s base into the 1990s. The club is now in Mount Washington, at the Meadowbrook Aquatic and Fitness Center, where John Cadigan, another Loyola man, is a coach and general manager.

Some of the power and precision found in the stroke of Phelps, who has set world records in five of the 13 individual Olympic events and is expected to become the first to win 10 gold medals over an Olympic career, can be traced to what the NBAC founders absorbed more than four decades ago.

“All three loved to read, and were good writers,” Dr. Abromaitis said. “They were people with great imaginations. It never occurred to me that their passion would translate into what it has.”

As novice coaches, Pierce and Stephens sent a boy from Loyola Blakefield to the 1968 Olympic Trials.

“My creativity was honed at Loyola High and Loyola College,” said Pierce, who left the NBAC in 1984, when he became an administrator at Loyola Blakefield.

“The Jesuit schools thought that they were more mentally and physically up to the task than some of the competition,” said Stephens, a champion in the old Mason-Dixon Conference. “We were dedicated to the sense of skill and hard repetition that it took to master something.”

Stephens turned Theresa Andrews and Anita Nall into gold medalists at the 1984 and 1992 Olympics, respectively. Both had relocated to Baltimore to train with the NBAC and attended archdiocesan high schools.

That level of commitment attracted the Phelps family to the NBAC in the early 1990s.

The club sent a 15-year-old Phelps to the 2000 Olympics, and pushed him to win six gold medals and two bronze at the 2004 Olympics. He has spent the last Olympiad living and training in Ann Arbor, Mich., but after Beijing, Phelps and his coach, Bob Bowman, will return to the NBAC to prepare for the 2012 Olympics.

Cadigan, whose brother Father Timothy J. Cadigan, is a Jesuit priest and professor of biology at the University of Scranton in Pennsylvania, sees a clear link between the order and how it has Phelps in line for what could be a record eight gold medals in Beijing.

“Consider one of the core ideals of a Jesuit education, Ad majorem Dei gloriam, ‘for the greater glory of God,’ where we are admonished to use our talent and ability to the utmost,” Cadigan said. “What you have been given is a gift, use it to give glory to the God who gave it to you.

“When you don’t use your gift to the fullest extent, in a way, that’s almost an agnostic reaction. You’re ignoring the source of the gift, God.”

Cadigan is a parishioner of Shrine of the Sacred Heart, Mount Washington, where his 17-year-old son Timothy was recently elected to the parish council. He is continuing a family tradition, as he is the great-great-grandson of Al Smith, who in 1928 became the first Catholic to run for U.S. president as the nominee of a major party.

Stephens taught English for 28 years at Loyola Blakefield. His pupils in the 1990s included Paul Yetter, an NBAC coach who has developed 19-year-old Katie Hoff into the female equivalent of Phelps, the best all-around swimmer in the world. Yetter will go to the Beijing Olympics as an assistant coach on the United States team.

Like Phelps, Hoff is a professional swimmer. After Beijing, she will begin her college studies. While on campus, she will serve as a volunteer assistant coach. Where will that occur?