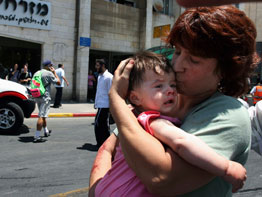 JERUSALEM – Violent acts focus priests back on the need to pray for peace, a Jesuit priest said following an apparent terrorist attack in Jerusalem.

“It is times like this when we are driven back to our roles as intercessors to God asking for peace,” said Jesuit Father David Neuhas, general secretary of the Hebrew Catholic Vicariate, the Hebrew-speaking Catholic community of Israel. “We turn to God with our pain and fear,” he said, adding that there don’t “seem to be enough people able to take that role.”

At least three people were killed and at least 45 wounded July 2 when the driver of a bulldozer used his vehicle to plow through a row of cars and buses in early afternoon traffic.

According to reports, a policeman climbed aboard the bulldozer and shot the Palestinian man from East Jerusalem dead at point-blank range. Reports also described dozens of people fleeing the scene in horror.

The Associated Press reported that three Palestinian militant groups took responsibility for the attack. None of the claims has been verified.

Father Neuhas said that until the man’s identity was firmly established and the attack confirmed as a terrorist attack it was hard to speculate exactly what the ramifications would be.

The attack was the first since March, when a resident of East Jerusalem opened fire in a Jewish seminary, killing eight students.