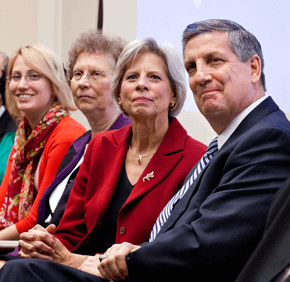 President-elect Conneely is the first male and the second layperson to serve as president, succeeding President Mary Pat Seurkamp, 65, the first layperson to lead the university. Dr. Seurkamp, who has been president since 1997, announced last May that she will retire. Her last day is June 30.

Conneely, 55, is currently associate provost and vice president of student affairs at Eastern Kentucky University in Richmond, Ky. He is also a faculty member in the Department of Counseling and Educational Psychology.

At a Feb. 23 press conference announcing him as president-elect, Conneely called Seurkamp’s leadership “a hard act to follow” and called her “a wonderful leader for the institution.”

“I’m very excited about working with the faculty and students,” Conneely said. “I’m looking to learn more about the history of the institution.”

The decision by the university’s Board of Trustees Feb. 16 selecting Conneely was unanimous. Conneely was one of three candidates for the position – the other two candidates were female.

“Today I have the pleasure of introducing him – it’s a boy!” said Patricia J. Mitchell, chair of the university’s Board of Trustees.

Mitchell told Conneely that he has “very big shoes to fill and they’re high heels.”

School Sister of Notre Dame Eileen O’Dea, vice president for mission at the university, said the search committee was “committed to the ideal of finding the best possible person.”

School Sister of Notre Dame Trinitas Bochini, a psychology professor at the university, said Conneely “has the depth and breadth we need to move forward.”

Working at a Catholic institution has been “a desire I had,” Conneely told the Catholic Review. “I’m very strong in my Catholic faith.”

His work as president of the university is a way for him to “live my faith through my vocation,” Conneely said.

Students, who are sad about Seurkamp’s departure, are excited for their new president.

“He seems very down-to-earth and approachable,” De la Haya said. “At a small school it’s hard not to go here and not know who the president is.”

Senior Emily Topper, 21, said having a male president is “definitely a change” but something she’s open to.

“I think like we can’t really discriminate,” Topper said. “As long as he’s true to the mission of the university, that’s what important.”

Junior Takia Raneri, 20, said she talked to the other candidates for the position and Conneely was the only one to shake her hand, which impressed her.

Conneely said he plans to be “an advocate and promoter” of the university.

“I did my research beforehand. I looked at the mission of Notre Dame. I think it’s a good fit,” Conneely said. “Being on campus is what solidified it.”