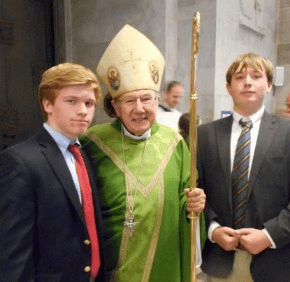 By Jessica Marsala
Special to the Review
Each day that fertility care practitioner Julie Tomko and Dr. Mary Ann Sorra, an OB-GYN, show up to work, they try to help God to bring another “masterpiece” into the world.
Sorra, who works at the Natural Fertility Care center at St. Agnes Hospital in Baltimore, and Tomko, founder and director of the FertilityCare Center of Baltimore, received the Archdiocese of Baltimore’s Culture of Life Medal of Honor Oct. 5 for their work helping women to understand and implement natural family planning or NFP.
The awards were presented by Auxiliary Bishop Denis J. Madden, principal celebrant, at the Respect Life Mass, which was held at the Cathedral of Mary Our Queen in Homeland and had approximately 550 in attendance, including many local high schools and college pro-life organizations.
In his homily, Bishop Madden compared God to an artist, since they both use “painstaking care and precision” when making their “masterpieces.”
Tomko, who worships at St. Mark’s in Fallston, said she felt “humbled, undeserving maybe,” receiving the award.
“It just makes sense to do what we do,” she said.

Sorra, the youngest of eight, whose own mother, also a doctor, chose life, despite the possible fatal complications of a heart murmur while pregnant with Sorra, agreed.
“All I’m doing is showing up to work every day,” said Sorra, who worships at Our Lady of Perpetual Help in Ellicott City with her husband. “We wouldn’t be here if there weren’t people who were coming to us … patients who are seeking us. So it’s really much more a reflection on our Catholic community than it is on us.”
In 2009, Sorra reached out to Tomko, who has been trained to teach the Creighton Model FertilityCare System method of NFP since 2008, to ask if she would be willing to teach her patients.
Sorra had just stopped prescribing artificial contraception at her former Pikesville practice. Tomko and her husband, who married in 2000 and now have four children, had been speaking to parishes about NFP since first learning about it in Pre-Cana.
Sorra told the Catholic Review that her decision and the subsequent publicity it received, “terrified” her, but after speaking to her brother, Father James L. Sorra, the pastor of St. Michael the Archangel in Overlea, realized that she needed to “hold out that light of Christ.”
“I think the more we’re willing to speak up, the more comfortable we become,” said Tomko, who likewise said she used to feel self-conscious putting her faith and beliefs into the spotlight. “I’m [now] so willing to tell people what I do, where I stand on things because there might be someone out there who’s on the verge like I was.”

Tomko said that at the Mass she was introduced to the 2-year-old daughter of a woman who came to her years previously to ask for her support after she had been turned down by another hospital.
“[That little girl] wouldn’t be here if it weren’t for what we are able to do,” Tomko said. “That in itself is awesome because again you don’t know what that little girl is going to bring into the world and the lives she’s going to touch.”
In a similar way, Bishop Madden, speaking of the daughter of his nephew, who was born after his nephew was diagnosed with colon cancer, said in his homily that she “turned the world of her family around by giving hope to her parents.”
“It’s amazing what one person, even a little baby, can do,” Bishop Madden said.
In honor of Respect Life month, many parishes are launching a “Spiritual Adoption” program, encouraging parishioners to pray for children conceived in this month. In June, baby items will be collected to be donated to mothers in need of assistance.
Also see:
St. Agnes hospital opens natural family planning-based OBGYN care
Pikesville gynecologist stops giving out birth control
PrevNext