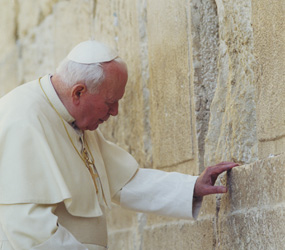 JERUSALEM – “In accordance with rules of hospitality and dignity,” Israel will not prevent Pope Benedict XVI from wearing his pectoral cross when he visits the Western Wall, the Israeli Foreign Ministry said.

Responding to what it called a “misleading quotation” in The Jerusalem Post, the ministry released a statement by Ambassador Mordechay Lewy from the Israeli Embassy to the Holy See March 17.

When Pope Benedict visits the Western Wall during his mid-May trip to the Holy Land, “the same procedure that was applied in the papal visit of the year 2000 will be valid,” Mr. Lewy said in the statement released by the Foreign Ministry. “The Israeli host will respect, as a matter of course, the religious symbols of the Holy Father and of his entourage.”

During his 2000 pilgrimage Pope John Paul II visited the site with his cross visible.

The Jerusalem Post article quoted the rabbi of the Western Wall, Rabbi Shmuel Rabinovitch, as saying that it was “not fitting to enter the Western Wall area with religious symbols, including a cross.”

“I feel the same way about a Jew putting on a tallit and phylacteries (Jewish prayer shawl and prayer box) and going into a church,” the rabbi was quoted as saying.

JTA, an international Jewish news agency, reported the rabbi has refused to allow other Catholic leaders to visit the Western Wall after they declined to remove or hide their crosses.