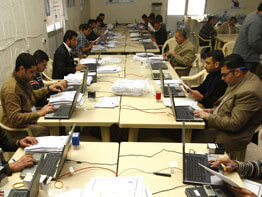 WASHINGTON – Although provincial elections in Iraq were held without major attacks or violence, an American peace activist said there were tensions and frustration over flawed voter registration.

“Everyone, Arabs and Kurds alike, (was) angry. Everyone mistrusts everyone. And it turns out that the stakes for the necessity of political change are really high in the Diyala province,” Michele Obed, a member of the Christian Peacemaker Teams stationed in Iraq, said in an e-mail sent after Jan. 31 provincial elections.

Ms. Obed, who is originally from Duluth, Minn., was a monitor for elections in Diyala, in northeastern Iraq. Under former Iraqi dictator Saddam Hussein, the region went through a process known as “Arabization” in which Kurds were pushed out to make room for Arabs from southern Iraq. In 2003 Kurds began to return to their homes in Diyala, making these elections critical to both Kurds and Arabs.

“We heard that about 1 million people were not allowed to vote in the Diyala province; 16,000-18,000 were Kurds … who were not able to register. They were convinced that the Arabs of the central government were trying to keep them from voting so as to influence the election,” said Ms. Obed. “However, as the day went on … we heard reports that large numbers of Arabs couldn’t vote either.”

As of Feb. 5, Iraqi officials were preparing to release preliminary results from the elections.

In an e-mail sent to Catholic News Service Feb. 3, Ms. Obed explained that in order to register as a voter in provincial elections “the voter must have a food ration card issued … on or before April 2008. Because tens of thousands of food ration cards were not (issued on time) to Kurdish returnees by the Ministry of Commerce, the returnees were disenfranchised.” She said some of the returnees had “voted in the same location in the 2005 national election.”

However, Ms. Obed said, internally displaced people from southern Iraq, primarily Arabs, were granted an exception and “were allowed to vote by simply registering up to two months before the election or to vote on election day without having been registered at all.”

“Granting Arabs of the South their voting rights while denying those same rights to the Kurds of the North only fuels an already volatile divide between the two ethnic groups,” Obed said. “This is an unconscionable distinction between citizens based upon their ethnicity.”

Ms. Obed said she heard of similar circumstances in the northern Nineveh province, where many Christians live. There also have been reports of voter fraud in western Anbar province, where results are being disputed by Sunni Arab tribal leaders.

Ms. Obed told CNS that, while provincial elections were mostly peaceful, “for all intents and purposes it appears that it (the process) was manipulated and flawed to the detriment of the Kurds.”

Although Ms. Obed said she didn’t vote “in my own country nor do I believe in the political processes of governments,” she acknowledged that the presence of the Christian Peacemaker Teams was important.

“There are good people there, Kurds and Arabs, Sunni and Shiite, who really do believe in democracy and the right of self-determination, and there are those that want to sabotage it,” she said. “If we walk with the former, they are strengthened.”

Meanwhile, in an interview from Iraq with the Catholic charity Aid to the Church in Need, Chaldean Archbishop Louis Sako of Kirkuk expressed the importance of the elections but also noted that Christians were not well-represented in them.

Christians were given only three seats and they ran the risk of being ignored, said the archbishop. Six seats, including the three for Christians, were allocated for religious minorities on provincial councils.

“These elections are positive – they are a definite step forward. This is a totally new experience for us,” he said. “Nothing is perfect – we Christians may have only a few seats but it is just a beginning. There are many changes needed.”

Provincial elections are not expected until later this year in Archbishop Sako’s province of Kirkuk.