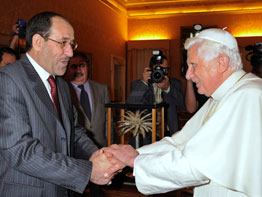 He said Pope Benedict “welcomed the invitation. And we hope that he will be making the visit as soon as he can.”

After taking part in a 20-minute, closed-door meeting with the pope at the papal summer residence south of Rome July 25, al-Maliki told reporters the pope’s “visit would represent support for the efforts of love and peace in Iraq.”

In talks with al-Maliki, the pope and Vatican officials renewed their “condemnation of violence, which continues to strike different parts of the country almost every day without sparing the Christian communities who strongly feel the need to have greater security,” the Vatican said in a written statement.

The talks focused on Iraq and the surrounding region, especially the plight of “numerous Iraqi refugees, inside and outside the country, who are in need of assistance,” including help to eventually return to their homeland, the statement said.

Al-Maliki said he urged the pope to encourage “Christians who left the country to go back and be part of the social structure of Iraq again.”

The talks included expressions of hope that “Iraq may definitely find the path of peace and development through dialogue and the collaboration of all ethnic and religious groups, including minorities,” the Vatican statement said.

Respecting individuals’ religious identities along with a “spirit of reconciliation and the quest for the common good” should underpin the different religious groups’ collaborative efforts, the statement said.

Speaking to reporters through a translator, al-Maliki said the pope understands the situation in Iraq and is aware that “bad people exist in all religions, whether Christian or Muslim.”

“This sound, realistic, objective understanding by His Holiness is the best answer to those who claim that Christians are persecuted in Iraq by Muslims,” said the Iraqi prime minister.

Al-Maliki said Iraq does not want to see discrimination against any religion, including the minority Christian population.

International human rights organizations and Iraqi witnesses have reported that since the U.S.-led invasion of Iraq in 2003, Iraqi Christians increasingly have been threatened with violence or death if they do not convert to Islam. Several Iraqi Christians, including Chaldean Catholic priests and an archbishop, have been kidnapped or killed by extremists.