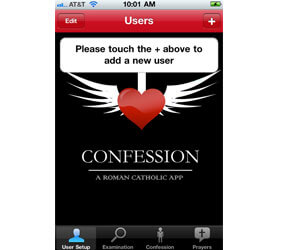 VATICAN CITY – A Vatican official said a new iPhone application can help Catholics prepare for confession, but cannot substitute for the sacramental encounter between a penitent and a priest.

“Confession: A Roman Catholic App” for Apple’s iPhone, iPad and iPod Touch was recently released as a way for Catholics to prepare for and participate in the sacrament of penance. Some recent press reports, however, have suggested that the application could replace in-person confession.

“It’s essential to understand that the sacrament of penance requires a personal dialogue between the penitent and the confessor, and absolution by the confessor who is present,” Jesuit Father Federico Lombardi, the Vatican spokesman, told reporters.

“This is something that cannot be replaced by any application. One cannot speak of a ‘confession via iPhone,’ “ he said.

Father Lombardi said the new application could be useful in helping people make an examination of conscience. In the past, he noted, Catholics would sometimes use written questions and answers to prepare for confession, and that’s something that could be done today with the aid of a digital device.

The application, developed by a small firm in Indiana, is based on the Ten Commandments. It was designed in part for people who have been away from the church and want the opportunity to go to confession.