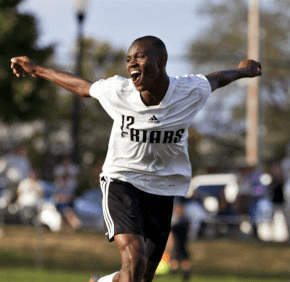 By Elizabeth Lowe
elowe@CatholicReview.org
Twitter: @ReviewLowe
Bernie Reif’s classroom may have looked different – it was a soccer field, after all – but it is where he taught thousands of Baltimore youths to play the sport he loved.
Reif, Archbishop Curley High School’s first soccer coach, is memorialized with a game named in his honor that matches the northeast Baltimore school against Calvert Hall, where his son, Chris, was a star in the early 1980s.
Playing on their home field, in front of several hundred spectators on the Feast of St. Francis of Assisi, the Friars got two goals from Kyle Mizell and beat the Cardinals 3-1 on an unseasonably warm Oct. 4 to claim the 12th annual Bernard J. Reif Alumni Cup.
It’s the fourth straight year Curley earned the coveted trophy.
Watch a video to learn more about the tradition.
“Bernie wasn’t just special to Curley or even to Calvert Hall,” said Barry Stitz, Curley’s soccer coach, vice president for advancement and a 1987 alumnus who played for the Friars. “He was special to the whole Baltimore soccer community.”
The two schools acknowledged their soccer rivalry by playing for the Alumni Cup from 2002 to 2007, when it was renamed after Reif died, at age 84, of mesothelioma. The Reif Cup match itself alternates between the two schools, with Calvert Hall being the host next year.
“Curley-Calvert Hall games are always big,” said Tom Giordano, 62, a 1969 Curley alumnus. “A lot of the guys are in the same neighborhood, they’re all friends. Bernie would be there, at the Curley-Calvert Hall game. Bernie’s heart was with Curley, but his heart was also at Calvert Hall.”
Chris Reif, one of Bernie’s four children from a 61-year marriage to wife, Theresa, 86, was the All-Metro Player of the Year for Calvert Hall in 1983, then excelled at the University of Connecticut.
In 2006, he was inducted into the Old-Timer’s Association of Maryland’s Hall of Fame, the same group that enshrined his father in 1986. While his father coached thousands of youths over the years, Chris Reif said, he wasn’t one of them.
“He wasn’t one of those parents telling their kids what to do all the time,” said Reif, 47. “He was always there if I needed anything.”
Bernie Reif began the soccer program at Curley in 1963, two years after the school opened. He left after coaching the 1968 team to the school’s first varsity championship in any sport, as the Friars beat Patterson High School for the old Maryland Scholastic Association A Conference championship.
At halftime Oct. 4, Curley’s 1993 unbeaten championship team and its coach, the late Tom “Pep” Perrella, were honored. Perrella and Giordano were among the top contributors for Reif during the Friars’ 1968 championship season.
“When we played, he (Bernie Reif) played,” said Giordano, who played for Curley from 1965 to 1968 and coached the Friars from 1973 to 1980. “He knew what was supposed to happen, where people were supposed to be.”
Giordano continued, “He was perfect for coming to Curley and starting that program. He had a superior knowledge of the game. He came from an era where Baltimore had a ton of good soccer teams.”
Reif’s passion for soccer began as a youth in the 1930s. He played at his parish, Sacred Heart of Jesus, now Sacred Heart of Jesus-Sagrado Corazón de Jesús, in Highlandtown.
He founded the youth program at the Shrine of the Little Flower; coached the club team Tom’s Produce; at Baltimore Junior College, now Baltimore City Community College; and at his alma mater, Mount St. Joseph High School in Irvington.
He retired from coaching in 1980, coincidence or not, just as his son Chris was entering Calvert Hall. Reif, who served in the U.S. Marine Corps from 1942 to 1945, worked for 40 years at Western Electric Company in Baltimore, retiring in 1985.
Stitz, the Curley coach, remembers Reif lingering after local games to discuss the action.
“On the way to your car you would stop and have a 10-minute conversation with him about soccer, the game,” Stitz said. “You almost looked to see if he was there.”
Also see:
Inside Sports: John Carroll’s marching band plays, and practicies, hard
Inside Sports: Ellie Gonzalez a national-class runner at Catholic High
Inside Sports: Spalding’s broad-based program decades in the making
PrevNext