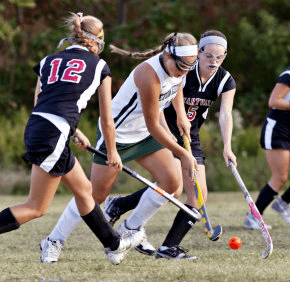 By Elizabeth Lowe
elowe@CatholicReview.org
Twitter: @ReviewLowe
The secret weapon for Seton Keough field hockey isn’t a choreographed play or star midfielder.
It’s their grass field.
“It (the grass field) definitely makes it a challenge,” said Tom Jester, the Baltimore school’s coach. “It’s hard to predict where the ball is going.”
Since Jester took over as coach in 2008, the Gators have excelled, despite the school lacking a turf field and a feeder program.
Some of the 14 girls on this season’s roster have club experience. Most play other sports. Junior Katie Audino, who also plays varsity lacrosse, calls the grass field a homefield advantage.
“It helps us because it’s our field,” said Audino, 16, who noted when the Gators play at home, they anticipate bumps and bounces.
Senior captain Christine Tomasic agreed, saying the grass field helps on the road too, “because we’re better on turf.”
Watch a video to see the Seton Keough field hockey team in action.

The Gators, 11-5 overall, concluded the regular season Oct. 21 and will take a high seed into the Interscholastic Athletic Association of Maryland B Conference playoffs. The goal is the championship game, Nov. 3 at Goucher College in Towson.
“Everyone (coaches and players) has worked hard and worked to make the program better,” said senior Ashley Lemanski, 17, the other captain, who plays club field hockey and is a member of the Gators’ swim and lacrosse teams.
Seton Keough is the defending B Conference champion. It went 18-3-2 last season, taking the Gators’ first title in the sport since 1994. Their rise began with Jester’s arrival in 2008. After a 7-9-1 record, “we started rolling,” Jester said.
Jester, a certified public accountant for the Department of Defense at Fort Meade, has coached field hockey for about 15 years. He calls coaching “a hobby that’s expanded and won’t quit.”
A club coach, Jester started a field hockey program at Monsignor Slade Catholic School in Glen Burnie when his daughters, Kristen and Julia, were students there. They graduated from Seton Keough in 2007 and 2011, respectively.
Jester’s approach includes treating the players like adults and working to build their confidence. When the Gators lose, his attitude is to pick up and move on.
“All is not lost,” Jester said. “There’s always a teaching moment in a loss.”
“We feel our coaches are educators outside the classroom,” said Josiah LaTona, Seton Keough’s athletic director and assistant principal. “There’s a learning moment in everything.”
At Seton Keough, which has a junior varsity, any student who wants to play field hockey is afforded that opportunity, said Amanda Malkowski, assistant field hockey coach and varsity lacrosse coach.
“They all have fun and they’re competitive,” Malkowski said. “They don’t take it too seriously, but when it’s time to play, they’re ready to win.”
Also see:
Inside Sports: Reif cup honors Curley coach, Calvert Hall parent
Inside Sports: John Carroll’s marching band plays, and practicies, hard
Inside Sports: Ellie Gonzalez a national-class runner at Catholic High
Inside Sports: Spalding’s broad-based program decades in the making
PrevNext