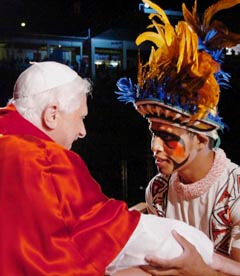 The indigenous organizations used the word “genocide” to describe the “persecution, land takeovers, murders, epidemics, sterilization of indigenous women and contraceptive measures imposed by governments, neglect and breakup of our communities” during the past century, but highlighted “the solidarity of the church and countless missionaries throughout the country.”

“We wish to transmit some of our anguish and hope, counting on your friendship and solidarity in building a more just and harmonious continent and world,” said the letter, presented to the pope May 10 by Cardinal Paulo Evaristo Arns, retired archbishop of Sao Paulo.

According to the Indigenous Missionary Council, the Brazilian Catholic Church’s office on indigenous affairs, Brazil has 241 indigenous groups with a total of 734,000 people who speak 180 languages. Nearly 1,500 groups of peoples have disappeared since the 1500s, when Europeans arrived in South America.

More than 1,000 of those extinct groups lived in the northern and northeastern regions of the country, where indigenous communities are still the target of threats, especially from ranchers who encroach on indigenous territories.

“In the past 10 years, 257 indigenous leaders were murdered for defending their territories,” the letter said. The victims included Guarani Chief Marcal de Souza Tupa-Y, who met Pope John Paul II during his first trip to Brazil in 1980, and Xicao Xukuru, who spoke with the pope during his 1991 visit.

The letter criticized the Brazilian government for delays in marking the boundaries of indigenous communities’ lands. Noting that the 1988 Brazilian Constitution called for those boundaries to be set within five years, the letter says, “Nearly 20 years have passed, and only 38.24 percent of the lands have been demarcated.”

Lack of clear boundaries leads to encroachment by ranchers, while conflicts and confinement to small areas are blamed for high suicide and malnutrition rates among Brazil’s indigenous people.

Besides the indigenous groups that have claimed territory, there are at least 46 nomadic groups in Brazil, according to the Indigenous Missionary Council, known by its Portuguese acronym as CIMI. Those nomadic groups, which shun contact with the outside world, are threatened by logging, clearing of land for ranching, wildcat gold mining and the damming of rivers in the areas where they live, as well as by diseases brought in from outsiders settling in those areas.