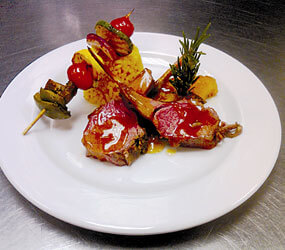 Whether one chooses seared scallops with summer succotash, roasted red pepper bisque or bacon-wrapped pork medallions, there are plenty of options to entice the palates of residents in independent living communities.

“I can only tell you what I don’t like, and that’s kale,” said Oak Crest resident Louise Kaufman with a chuckle.

As chairperson for dining services on the Residents Advisory Council of the Parkville retirement community, Kaufman serves as a bridge between residents and dining services.

She knows just how important the dining experience is to residents.

“A lot of people are shy, but they do come to dinner,” she said. “It’s a way for them to have a decent nutritional meal and secondly, it’s the only time they’re socializing.”

Executive Chef Joe Bollinger is aware of the importance of meals for Oak Crest residents as well. A graduate of the Baltimore Culinary Arts School, he loves experimenting with cooking and pastries and finds it “really rewarding” to do things that make residents happy.

“Some residents are waiting to get seated before a restaurant even opens,” Bollinger said, noting that there are three restaurants and a pub at Oak Crest which serve 1,800 people each day.

Farther north, in Lancaster, Pa., situated in what he describes as “nature’s garden,” Willow Valley manager of dining services Mark Siems, relies on contracts with local farmers and produce suppliers for fresh ingredients for residents.

“We have some of the most fertile land in the area and produce a bountiful harvest yearly,” said Siems, who manages the Lakes campus, which currently serves more than 800 meals a day at Lakes Manor “The ability to offer seasonal menus and contract directly with farmers has really benefitted the residents.”

Oak Crest also deals with purveyors who work with local farmers, especially in the summer, when products are available.

No matter the age or the retirement community, one thing is clear. Residents love their food.

“They love tenderloin,” Bollinger said. “We go through quite a bit. They also like prime rib and anything with shrimp or crab. In the fall, one of their favorites here is sour beef and dumplings, and whenever I serve turkey or pork loin, I have to have sauerkraut.”

Oak Crest has a monthly “elegant dinner” featuring a five-to six-course meal with lobster, dishes with tenderloin or lump crab meat, a fancy dessert and “all the wine you can drink,” Bollinger said.

Siems, who is also a certified dietary manager, said residents love traditional dinners as well as meals with pizazz.

A recently discovered heritage pork product raised locally within Central Pennsylvalnia has been a hit.

“The ancestry of the breed goes back 300 years and has great tenderness and flavor,” Siems said. “We thinly slice the pork and encrust with a mustard sauce and cover in bread crumbs. Top with a fresh apple chutney and the flavor will melt in your mouth.”

Experimenting to meet residents’ various needs and desires comes with the territory. Oak Crest offers many vegetarian options, while Willow Valley is working on detailing nutritional information in light of the influx of allergens.

Bollinger said some residents aren’t too fond of chilled soups, but many residents responded favorably to tabbouleh, a classic Middle Eastern salad with parsley, mint, bulgar, tomato and cucumber.

Willow Valley has rolled out action stations ,which enables food to be prepared right before residents’ eyes and Kaufman said Oak Crest will soon offer a fruit smoothie bar and brick oven pizzas.