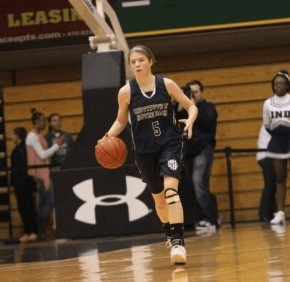 The moment she steps onto the hardwood, the only thing on Kayla Kelly’s mind is basketball.

Kelly, a senior at the Institute of Notre Dame, is a combo guard/forward for its varsity basketball team. She’s been a member of the squad since her sophomore year and said she enjoys the peace of mind that basketball brings to her everyday life.

“It’s almost like an outlet for the stuff going on outside of basketball,” Kelly said about taking the court. “For those 32 minutes, it’s all about basketball. It’s nice to get away from things like homework and other stuff that’s going on.”

Her next game will not exactly be played in a vacuum, as IND and Mercy meet in their annual showcase at the Towson Center Jan. 27, at 7:30 p.m. The Interscholastic Athletic Association of Maryland rivals typically draw that arena’s largest basketball crowd of the winter.

Kelly was selected as a captain by her teammates, likely receiving the honor due to her hard work on the court. Though Kelly probably won’t be filling up the stat sheet with a huge amount of points or rebounds, it’s the small things that have earned her the respect and admiration of her teammates, said Coach Jerry Hahn.

“She’s really like an unsung hero as the senior captain,” Hahn said. “She works really hard and is a coach’s delight. She does a lot of the dirty work so to speak. She takes charges and does all of the little stuff in between. The other players look up to how she goes about her business on the court. She’s just willing to do whatever you need.”

Unlike most players, Kelly actually prides herself on the scrappy, hustle plays that most wouldn’t embrace.

“It’s always nice when I take a charge – I think that’s one of my most favorite things to do,” Kelly said. “Most people only look at the people who score the points and get the rebounds, but I think defense and hustling are the things I do best. When I take a charge and get an offensive foul on the other team, that’s my way of contributing to my team.”

Kelly is a key contributor to the softball team as well. A varsity starter since her freshman year, the shortstop will attend and play for Bethany College in West Virginia.

Before she gets there, however, Kelly has a course load to complete that includes honors courses in statistics, U.S. Government and English. Kelly is also a teacher’s assistant in two religion classes.

She has a 3.87 weighed GPA and is a member of the National Honor society, the president of the Peer Ministry Club, the vice president of the Ambassador Club and a counselor at Tamarind, a summer camp for inner-city girls at IND.
A member of St. Jane Frances Parish in Pasadena, Kelly has earned over 300 community service hours.