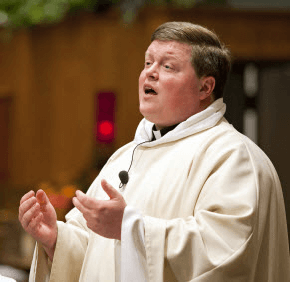 ELLICOTT CITY – Father Matthew Buening, pastor of St. Paul, was wrapping up the last class in a series on the documents of the Second Vatican Council Jan. 10, and taking questions on the council’s longest document, “Guadium et Spes,” the Pastoral Constitution on the Church in the Modern World.

A parishioner raised her hand and asked: How well did Father Buening think the church is living up to the call of the Council to evangelize?

It is a question that also struck Father Buening as he reviewed the documents, he told the Catholic Review.

“It’s 50 years later, and we still have so much work to do,” he said. “We’re not close to where ‘Lumen Gentium’ is calling us to be as church. … Just a cursory glance at these beautiful documents can’t help but shake the rust off and say ‘Get to work.’ “

In October, Pope Benedict XVI launched a Year of Faith to commemorate the anniversary of the opening of the Second Vatican Council. In the apostolic letter “Porta Fidei,” or “Door of Faith,” the pope wrote that the year is intended to “arouse in every believer the aspiration to profess the faith in fullness and with renewed conviction of the faith in the liturgy, especially the Eucharist.”

The pope began the letter by observing that Christianity is no longer broadly accepted in large parts of society, and “a profound crisis of faith” is widespread.

Among them, only 6 percent described themselves as atheists and agnostics; the others are “nothing in particular,” although a majority report believing in God.

Father Buening is concerned that some without faith may be part of his own congregation.

“There are people who go to church on a regular basis who don’t know who Jesus is,” Father Buening said. “Maybe they’re one difficulty or one further temptation of the world away from not coming to church. To keep people active, to keep people growing in their faith is essential so we can at least stop people from drifting away from the church.”

Although many point fingers to lower church attendance rates among the millennial generation, those born in the 1980s and ‘90s, Father Buening sees difficulties with faith among older parishioners as well.

He cites superficial understandings of God and the church, what he called “a silent, empty shell of faith that exist in our churches, (in) good people who have never been truly challenged, or truly encouraged, to have their faith mean something more in their lives than a duty to accomplish on Sunday.”

A “duty” will not help Catholics face life’s challenges, he added.

In observance of the Year of Faith, Father Buening launched the YOUniversity of Vatican II, an adult faith formation series that began with the series on Vatican II, and is now focusing on the Catechism of the Catholic Church – two topics the pope recommended in “Porta Fidei.”

The weekly classes are supported by Ellicott City parishes, whose pastors and associates plan to take turns teaching the Catechism series.

St. Paul parishioner Robin Campbell, 56, said the classes have helped her rediscover aspects of the faith she was taught decades ago, but have faded over time.

“We tend to lose faith formation after we leave religious school,” she said. “I think with so many people, when you have gaps, you don’t even realize it sometimes.”

The classes are held in St. Paul’s Center for the New Evangelization, a new multi-purpose building constructed on the parish’s campus overlooking downtown Ellicott City. The center draws its name from the writings of Blessed John Paul II, Pope Benedict XVI and other church leaders, who in essence describe the “new evangelization” as the need for Catholics to be renewed in their faith in order to evangelize others.

Father Buening hopes a deeper faith among his own parishioners will inspire Catholics who have left the church to return.

Three miles southeast of St. Paul, Our Lady of Perpetual Help launched a different initiative to attract Catholics who rarely attend Mass. Its pastor, Father Erik J. Arnold, suspects the reason some Catholics stay away is a misconception of who “belongs” at church.

“I think that they may not feel like they fit in well in a parish, because they say of themselves, my life isn’t perfect yet, but maybe when it is, I can find a home here,” Father Arnold said. “We wanted to get rid of that perception. … We come to the Lord because we’re broken and need to be healed.”

The parish hosted an event Jan. 6 where four parishioners shared challenges to their faith, including alcoholism, personal tragedy and intellectual questioning.

The parish advertised the event through Facebook and brochures at Christmas Masses, when Catholics who infrequently attend were likely to be in the pews. It attracted more than 40 people, Father Arnold said. Some were regular parishioners, but others less familiar.

The parish intends to hold a similar outreach at Easter.

In Lake Shore, Our Lady of the Chesapeake is focusing on day-to-day Christian life with silicone wristbands printed with the message: “Who do you say that I am?” – Jesus’ question to his disciples, recounted in Mark 8:29.

For a Christian, the response should evoke joy, said Tim Janiszewski, the parish’s pastoral associate for youth ministry. He conceived of the idea as a way to remind the wearer to be a witness of Christian joy, an attractive disposition and natural evangelization tool. It also prompts conversation when people ask about it, he said.

So far, the parish has handed out more than 1,000 wristbands, he said.

The Church of the Nativity in Timonium looked to popular Protestant mega-churches when crafting its approach to evangelization, which targets non-churchgoing Catholics – “the person who went to confirmation class and never came back,” said Tom Corcoran, associate to the pastor, Father Michael White.

A host of volunteers create a welcoming atmosphere, from a parking crew to greeters at the door, engaging homilies and dynamic music.

The new evangelization “is what we do all the time. We feel like the whole church needs to be geared around that,” Corcoran said. “We try to constantly be thinking about the person who is not a church person, and what their experience will be like when they come to the church.

“Like a good restaurant, if it’s good, you’ll want to go back.”

Evangelization was the topic of a Jan. 14 meeting of western Maryland parish leaders, attended by Baltimore Archbishop William E. Lori. Leaders asked themselves, “Why do we want the people back?” said Capuchin Franciscan Father Gregory Chervenak, pastor of Our Lady of the Mountains in Cumberland.

Archbishop Lori made a remark that struck a chord for Father Chervenak: “It’s not what we’re offering, it’s whom we’ve fallen in love with.”

Evangelization means “we experience Christ as a real person in our lives and we fall in love with him,” Archbishop Lori told the Catholic Review.

For more articles on the Year of Faith, click here.