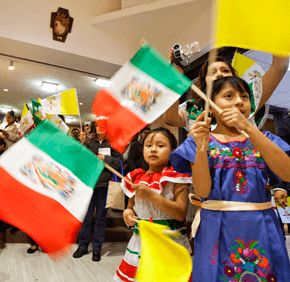 By Maria Wiering
mwiering@CatholicReview.org
Twitter: @ReviewWiering
LAUREL – It was the middle of Mass, but all eyes were on Zynthia Maria Quinonez, 9, as she stood at the front of the church in a pink dress and blue-green veil.
She handed roses to Edgardo Cuellar, also 9, who, in the role of St. Juan Diego, rounded the aisles before meeting William Lopez, 5, in a brown robe, aluminum-foil crosier and bright pink zucchetto – Bishop Juan de Zumarraga of Mexico, whom Juan Diego had to convince to build a church for the Blessed Virgin Mary on Tepeyac hill in 1531.
An annual tradition at the Resurrection of Our Lord, Laurel, the skit was part of the parish’s Mass and celebration honoring Our Lady of Guadalupe, whose feast is Dec. 12.
Because the feast falls on a Wednesday this year, Resurrection held its Mass and celebration Dec. 9; other parishes have special Masses planned for Dec. 16, including Holy Trinity, Glen Burnie, where Archbishop William E. Lori will celebrate Mass at 6 p.m.
In Laurel, Father Jesus Aguirre-Guzman, associate pastor, celebrated the standing-room-only Mass, which included a procession of flags from North and South American nations.
To view a slideshow, navigate the arrows below.
Most attendees waved two smaller flags, one for Vatican City, the other for Mexico, with an image of the Virgin of Guadalupe replacing the standard eagle. A six-foot statue of the Virgin of Guadalupe stood to the left of the altar, and the sanctuary was covered with flowers and smaller images and statues of Mary.
“Viva la Virgen de Guadalupe!” Father Aguirre-Guzman encouraged the congregation to cry during the homily.
At the end of Mass, worshippers processed the statue of Our Lady of Guadalupe through the parking lot, before parishioners gathered in the adjacent hall for music and tacos, tamales, chicken mole and “champurrado,” a hot, sweet, cornmeal-based drink.
Celina Aragon, 19, carried an El Salvadoran flag in the procession, wearing a white and blue dress in the country’s traditional style. Her parents were born in El Salvador, and she was proud to represent her heritage, she said.
“This is a really huge day,” she said. “It’s a really important day for us to remember that (the Blessed Virgin Mary) is here and she does do miracles.”
To view a video, watch below.
Adolfo Martinez, 30, said that as a Mexican immigrant, he used to view the annual celebration as a cultural event. After undergoing a personal conversion, he now sees it as an expression of faith, he said.
“When you start to think about serving God, now (Our Lady of Guadalupe) is about faith,” Martinez said.
Resurrection is a diverse community, with parishioners from 23 countries, said parishioner Antonio Santiago. Born in Puerto Rico, whose patroness is Our Lady of Divine Providence, Santiago, 57, said he has “adopted” Our Lady of Guadalupe and feels part of the celebration.
Our Lady of Guadalupe has long been revered in Mexico, where her apparitions led millions of Aztecs to convert to Catholicism. Pope Benedict XIV declared her Mexico’s patroness in 1754, and Pope St. Pius X named her patroness of all of Latin America in 1910.
Devotion to the Virgin of Guadalupe has increased among Catholics in the United States and Canada due to immigration and her role in pro-life causes as “patroness of the unborn.” Pope John XXIII named her “Mother of the Americas” in 1960.
Each year, her feast day recalls the events of Dec. 9-12, 1531, when Juan Diego, a poor Aztec and Catholic convert, passed by Tepeyac hill, heard singing and encountered a vision of the Blessed Virgin Mary. She told him to tell the bishop she wanted a shrine built in her honor there. Juan Diego obliged, but the bishop did not believe him. Mary appeared to him again, and told him to pick roses blooming out-of-season there and bring them to the bishop as a sign.
When Diego unfurled his tilma, or apron, before the bishop, the roses fell to the ground, revealing a miraculous image generations thereafter would know as the Virgin of Guadalupe. It convinced the bishop to build a shrine, and now St. Juan Diego’s tilma attracts millions of pilgrims annually to present-day Mexico City. The image purportedly defies scientific or artistic explanation.
Pope John Paul II canonized St. Juan Diego in 2002; his feast was Dec. 9.
Editor’s note: Beginning Dec. 12, Pope Benedict XVI will send messages in eight languages, including Arabic, from eight different Twitter accounts. @Pontifex is the English feed while the other language accounts use an extension of the main handle. For example, the Spanish feed is @Pontifex_es.
Related articles:
Tens of thousands gather to honor Our Lady of Guadalupe
Copyright (c) Dec. 10, 2012 CatholicReview.org
PrevNext