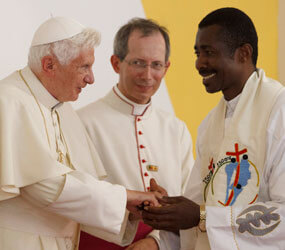 COTONOU, Benin – Arriving in Benin for a three-day visit, Pope Benedict XVI urged the African continent to protect its ancient values in the face of spiritual and ethical erosion.

“The transition to modernity must be guided by sure criteria based on recognized virtues … firmly rooted in the dignity of the person, the importance of the family and respect for life,” the pope said after arriving Nov. 18 at Cardinal Bernardin Gantin International Airport in Cotonou.

The 84-year-old pope was welcomed by President Thomas Yayi Boni, church and civil dignitaries and an exuberant crowd of singing, scarf-waving women who danced in salutation.

Smiling as he stepped onto the tarmac, the pope strolled to a platform and exchanged speeches with the president. The pope said he had come to Benin, a small nation in West Africa, to celebrate 150 years of Christianity in the country and to present a document on the church’s future on the continent.

He encouraged Africans to embrace the positive aspects of modernity without neglecting their past.

“It needs to be accompanied by prudence for the good of all in order to avoid the pitfalls which exist on the African continent and elsewhere, such as unconditional surrender to the law of the market or that of finance, nationalism or exaggerated and sterile tribalism which can become destructive,” he said.

He also warned of the “politicization of interreligious tensions” and “the erosion of human, cultural, ethical and religious values.”

The pope made a point of greeting the traditional chiefs of Benin and said they had an important contribution to make to the country’s future, with their “wisdom and understanding of local customs.”

As Africa undergoes changes, he said, the church wants to contribute with its presence, prayers and works of mercy.

“She wants to be close to those who are in need, near to those who search for God. She wants to make it understood that God is neither absent nor irrelevant as some would have us believe but that he is the friend of man,” he said.

The pope said another reason for coming to Benin was his personal relationship with the late Cardinal Bernardin Gantin, with whom the pope worked side by side for many years in the Roman Curia. He said that over the years, the two met many times, engaged in deep discussions and prayed together.

“Cardinal Gantin won the respect and the affection of many. So it seemed right that I should come to his country of origin, to pray before his tomb, and to thank Benin for having given the church such a distinguished son,” he said.

Later in the day, the pope was to visit the cathedral in Cotonou, where hundreds of faithful had assembled in anticipation.

Speaking to reporters during his six-hour flight from Rome, Pope Benedict said Africa should not be viewed merely as a continent of problems.

Africa’s problems are not yet overcome, he said, but there is “a freshness, a positive view of life in Africa, a youthfulness that is full of hope, and also a sense of humor and joy.” He said Africans still had an awareness of God as a presence in everyday life.

Referring to Pentecostal groups that have grown in membership throughout Africa, the pope said they had success but not stability and were not a model for the Catholic Church to imitate. The church’s liturgy, he said, should be understandable and participative, but not “sentimental.”

At the same time, he said, it was important that the church’s message be simple and concrete, and not seen as something European and unintelligible to Africans.