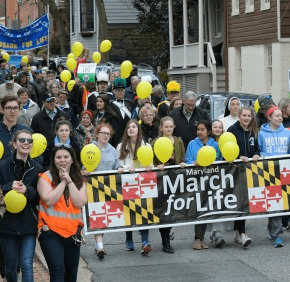 By Erik Zygmont
ezygmont@CatholicReview.org
Twitter: @ReviewErik
Leading about 100 teenagers in an all-night prayer vigil in 2009, sparked some of the most profound conversions of heart and mind when he abandoned the event and sprinted off into the darkness at about 3 a.m.
Cartagena – now director of youth ministry for two Ellicott City parishes, Church of the Resurrection and St. Paul – had received a phone call from his wife, who was going into labor with the couple’s first child.
“I was hosting the vigil, but I told everyone, ‘My wife’s having a baby; I’ve got to go,’“ Cartagena remembered. “It was our first child and I was very excited.”
The vigil – which in subsequent years attracted up to 1,000 participants – was held at Resurrection of our Lord in Laurel, the night before the annual March for Life in Washington, D.C. Since 2000, when he was a sophomore in high school, Cartagena has fervently participated in the march.
That year, Isabella Cartagena was born Jan. 22, the day of the pro-life movement’s signature event in the U.S.
“Knowing that day there were thousands of people celebrating the gift of life and standing up to defend it, we were able to turn it into a big prayer for God, to thank him for his gift, and to offer it up for all the other children in the womb,” Cartagena said, noting that his wife is also “very, very involved in the pro-life movement.”
The “coolest thing” came later, he said. The 31-year-old, now a father of four with a fifth on the way, received emails from some of the teens who had been at the vigil. Their messages, he said, indicated that they had “had some doubt, and maybe didn’t know where they stood,” even as they participated.
Seeing the joyful shock on the soon-to-be father’s face as he hurriedly left that night “inspired them a little bit,” Cartagena said, adding that they told him that witnessing it “helped them regain strength in defending life.”
Cartagena continues his work in the same. In 2016, despite an accurate blizzard forecast, he brought several teenagers from Resurrection and St. Paul to Washington to attend the Mass for Life, an annual youth event held on the morning of the March for Life.
Every year, he dedicates a youth group night to pro-life issues, “to help young people start talking about the topic.”
Like many pro-life activists, Cartagena is troubled by the prospect of physician-assisted suicide for the ill, the infirm or the elderly.
“We all have an inherent dignity within us, and it doesn’t come from what stage of life we’re in, or what we can do, or what our talents are,” he said.
Maryland March for Life
Did the blizzard ruin your plans to walk in the March for Life in Washington? There’s still the Maryland March for Life, March 7 in Annapolis.
Youth rally: 4:30 p.m. with singer Caitlin Jane and pizza.
Mass: 5:15 p.m. at St. Mary Church, 109 Duke of Gloucester St., Annapolis.
March: Marchers will begin assembling in the church parking lot at 6:15 p.m. and will begin the march through Annapolis at 6:30 p.m. A shuttle will be provided for those who cannot march.
Rally: 7 p.m. on Lawyers Mall, hosted by Tracey Tiernan of 95.1 SHINE-FM. Featured speakers include Ramona Trevino, former Planned Parenthood manager, and Wayne Cockfield, veteran and disability rights advocate.
Dinner: 8 p.m., St. Mary Church, free Chick-fil-A and mixer.
For more information visit marylandmarchforlife.org.

The Archdiocese of Baltimore is offering buses to the Maryland March for Life from the following locations: