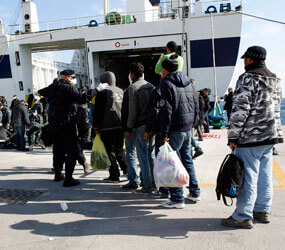 VATICAN CITY – The new flow of North African immigrants into Italy is putting the Vatican’s teaching on immigration to the test.

More than 22,000 “boat people,” many fleeing political unrest in Tunisia and Libya, have arrived on the tiny Italian island of Lampedusa this year. The fighting in Libya has spurred more people to flee in recent days. Not all survive the trip: About 150 people drowned April 6 when a migrant boat capsized in rough seas.

Church leaders have underlined the broad right to emigrate, the specific rights of refugees and the responsibility of wealthier nations to welcome those in need. But their moral advocacy has provoked criticism and even derision among some Italians, who have suggested that the Vatican and other religious institutions be the first to open their doors to the wave of immigrants.

Because it lies only 90 miles off the North African coast, Lampedusa has long been the gateway to Europe for North Africans. Residents have complained that the island’s infrastructure is overwhelmed, and in response Italian leaders have begun relocating the new arrivals to other Italian regions – whose residents don’t seem to want them, either.

The government of Italian Prime Minister Silvio Berlusconi has proposed financial aid to Tunisia in a bid to halt the immigration and repatriate the Tunisians who have recently arrived in Italy. The issue, meanwhile, has become a political football among Italians.

Cardinal Angelo Bagnasco, president of the Italian bishops’ conference, has called on Europe to recognize that Italy cannot handle the migration flow by itself, and that Lampedusa is part of the European Union’s southern coast. European bishops meeting April 3 agreed, saying that the crisis “requires the solidarity of all European countries and their institutions.”

But Cardinal Bagnasco also reminded Italians that the current immigration emergency stems in part from long-standing global inequities, and that Europe cannot keep out the world’s poor simply by patrolling its borders.

“It’s an illusion to think that one can live in peace, keeping at a distance young populations that are burdened by deprivation and that are legitimately trying to satisfy their hunger,” he said. Persuading these people to remain in their homeland will require implementation of “policies of true cooperation,” he said.

In Lampedusa, meanwhile, Italian members of the charismatic renewal held a prayer vigil April 4 to demonstrate what they called “the face of Christian humanism that does not discriminate in welcoming people.”

“The closing of borders, of hearts and of minds to an exodus like the one we are experiencing provokes humanitarian catastrophes,” said Salvatore Martinez, president of Italy’s Renewal in the Holy Spirit movement.

The church has suffered a significant political backlash in the current climate, however. Several groups and newspapers have proposed that the Vatican open up convents, seminaries and its own unrented apartments to immigrants, noting that the church receives tax breaks on some of the properties.

In fact, Caritas Italy has already arranged to lodge some 2,500 in church institutions across the country. In announcing the step, church leaders said they wanted to show that they practice what they preach. They called on all Italians to make a “new effort of solidarity,” despite the prolonged economic downturn in the country.

That is not a popular message these days. But it is very much part of traditional church teaching on immigration, which goes back more than a century.

The responsibility to welcome the stranger has roots in the Bible, and as Pope Benedict XVI recently noted, Jesus was himself a refugee when the Holy Family fled into Egypt. The “right to emigrate” was defended in a 1952 apostolic constitution by Pope Pius XII, who also noted that states can control the flow of migration, but not for arbitrary reasons.

In short, the church has consistently taught that states have the right to regulate their borders, but must not enact so many restrictions that it nullifies the right to emigrate.

Global migration has changed greatly from the 1950s, however. When Pope Pius wrote his document, immigration was viewed as a nation-building resource that usually involved permanent settlement in a new land. Modern migration is often for temporary employment and involves millions of documented and undocumented workers.

In Italy, immigrants make up approximately 7.5 percent of the total population. Demographers have pointed out that the immigrants, who are generally younger people, have helped balance Italy’s aging population and low birth rate. But some political parties maintain that immigration has reached the saturation point in Italy.

Vatican officials are among those who have argued against a fortress mentality, especially in times of crisis. Archbishop Antonio Veglio, president of the Pontifical Council for Migrants and Travelers, has said that while governments have a legitimate right to regulate immigration, “there is nevertheless the human right to be rescued and given emergency help.”

Behind that statement lies a statistic sometimes cited by church experts: Over the past 23 years, more than 15,000 migrants have died trying to reach Europe – a toll that is growing daily.