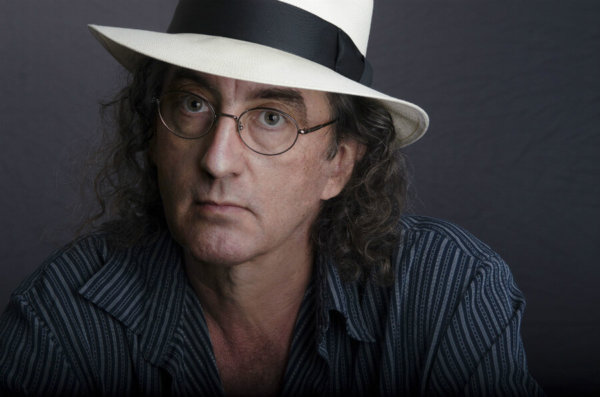 Singer James McMurtry, pictured in a 2016 photo, is one of a fistful of performers crisscrossing the western United States as part of the Lampedusa tour that benefits Jesuit Refugee Service's Global Education Initiative for refugee families. (CNS photo, Mary Keating-Bruton, courtesy conqueroo)

WASHINGTON — James McMurtry, outside of the poetry of his songs, can be plainspoken.

McMurtry is one of a fistful of performers crisscrossing the western United States as part of the Lampedusa tour that benefits Jesuit Refugee Service’s Global Education Initiative for refugee families.

“My agent, Frank Riley. called me and said he had a spot open” on the tour, McMurtry told Catholic News Service in an Oct. 5 telephone interview from Austin Texas, his home. “He thought it was a good thing to do.”

Told the purpose of the tour, McMurtry said he had to agree. “It’s a good idea to get schools going in refugee camps,” he added. “If I were in a refugee camp, I’d sure want my kid in school.”

Recording artists are weaving in and out of the tour as their own concert schedules permit. In addition to McMurtry, one of the many name acts taking the stage is Emmylou Harris, who headlined last year’s Lampedusa tour of the eastern United States.

McMurtry joins the tour Oct. 12 in Tucson, Arizona. Chances are he’ll be joined by several of the following: Dave Matthews, Joan Baez, Steve Earle, Brandi Carlile, Lucinda Williams, Patty Griffin, Alynda Segarra and Lila Downs. Unnamed “special guests” may drop in from time to time on the tour, which winds up Oct. 15 in Dallas.

The Lampedusa concert format features individual musicians and their guitars, singing a song they’ve written or covering a tune that was important to their formation as a musician. There also is ample opportunity for concertgoers to make contributions to Jesuit Refugee Service.

For those unfamiliar with the name Lampedusa, it’s Italy’s southernmost island, closer to Tunisia (70 miles) than to Sicily (127 miles). It has become a way station for North African refugees fleeing their homeland in the hope of safety and shelter elsewhere.

In July 2013, Pope Francis chose Lampedusa for his first official trip outside Rome. He said Mass for migrants on the tiny island and condemned the “global indifference” to their plight. The pontiff also tossed a funeral wreath into the Mediterranean Sea — where thousands of people die each year escaping from economic distress, political crises or persecution.

If McMurtry’s name sounds familiar, it may be because he’s the son of renowned novelist Larry McMurtry. James’ published works, though, are much shorter, and James’ own son has followed in his father’s footsteps and become a professional musician, sharing the stage with his dad on occasion.

As a recording artist, McMurtry doesn’t buy into the talk that vinyl LPs sound warmer than CDs. “I started recording with guys from the analog era. Recording 2-inch analog, they beat the notion into me that analog was warmer and better,” he said. “It’s not necessarily better. It’s good for my voice — it’s a natural compressor. Piano, I think, is better recorded digital(ly). … I remember the first time I heard a CD, I thought, ‘This is it.'” And don’t get him started on cassette tapes.

Nothing compelled McMurtry to get into music as a profession. “I wanted to be Johnny Cash when I grew up,” he told CNS. “I dropped out of school in my 20s, just gigging around Tucson, San Antonio. It just kind of evolved, really.

“I entered a songwriting contest at the Kerrville (Texas) Folk Festival. There were six winners out of a field of I don’t know how many in 1987. And I was one of the six, which was big boost for my career. That means I could book gigs in Austin as well as San Antonio.”

McMurtry moved to Austin, and it’s been his home when he’s not on the road. The dynamics of touring have changed since he recorded his first album in 1989. “It’s all flipped around. You used to cut a record, and then go touring to support the record,” he said. But with CD sales more or less in free fall since the start of the century, McMurtry added, “you make a record so you can put fannies in the seats” at tour stops.

He knows well the civic slogan “Keep Austin Weird,” which other cities have adopted for themselves. “There’s a much more right-learning county to the north, Williamson County. And they came out with ‘Keep Williamson County Normal.” Then I saw one that said, ‘Keep San Antonia Lame,'” he said.

Austin, though, is “not very weird now,” he added. “It’s a piece of Los Angeles that broke off. They’ve had an insane building boom the last 10 years. We’d go on tour and be back, and there’d be building I’d never seen before. When I moved here, there wasn’t even (parking) meters. The cost of living’s going up and artists can’t afford to live here.”