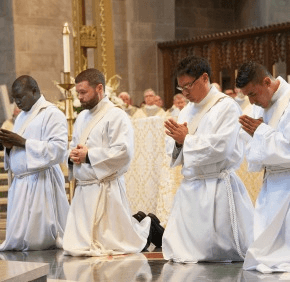 As the four men knelt before the altar, priests moved past – young and old, hale and frail, in the various stages of their lifelong commitments – pausing at each to lay hands solemnly on his head and confer to him the gift of the Holy Spirit.

The ancient gesture was part of the sacrament of Holy Orders, through which the four kneeling men – now Father Carlos A. Osorio, Father Christopher U. de Leon, Father Francis M. Ouma and Father Joshua D. Laws – became the Archdiocese of Baltimore’s newest priests.

Father Osorio, 31, said that the laying of the hands was the most moving part of the June 20 liturgy at the Cathedral of Mary Our Queen in Homeland.

“It’s when you really feel the power of the Holy Spirit,” he said.

Father Osorio, who has been assigned to St. Joseph in Cockeysville, said that he felt “complete.”

“I have my vocation fulfilled,” he said. “My parents are here, and people who love me so much, and I can’t ask for anything else – I can’t.”

Christopher de Leon, Francis Ouma, Carlos Osorio and Joshua Laws smile at their June 20 ordination to the priesthood. (Bill McAllen/Special to the Review)

Father Laws, 30, who grew up a parishioner of St. Stephen in Bradshaw and has been active in the archdiocese throughout his life, was also moved by the joy and intensity of the laying of hands.

“All my life, these guys were my heroes,” he said of the men who put their hands on his head. “Now, we’ll be sharing the burdens and sharing the joys. It really kind of caught me off guard, and I was crying the whole time.”

Father Laws will spend the summer at Holy Family Catholic Community in Middletown.

Archbishop William E. Lori noted in his homily that each of the ordained men had at the start of the ceremony been called upon by name and answered with a simple word, “Present.”

“Your answer didn’t merely indicate that you made it to the church on time to be ordained,” the archbishop said, his subtle deadpan coaxing gentle laughter inside the cavernous cathedral, which was fully packed.

“No, it signaled something much more profound,” continued Archbishop Lori. “You are saying to Christ and to the church that you are wholly and entirely present – body, mind and spirit.”

He exhorted the men to maintain a “warm and life-giving” relationship with God. “Otherwise, you will merely be dispensers of tired ideas and boring information,” the archbishop said. “You are anointed to proclaim words of spirit and life. Your words must pass from your hearts to the hearts of your listeners.”

After the archbishop’s homily, the four men were presented as candidates for ordination. They placed their hands in those of Archbishop Lori, promising respect and obedience to him and his successors.

In an expression of their total dependence on God, they prostrated themselves  on the floor before the altar as several hundred faithful chanted the Litany of the Saints.

Father Joshua Laws receives the chalice and paten from Archbishop Lori. (Bill McAllen/Special to the Review)

After the laying of the hands, by the archbishop and dozens of other priests, the four men were vested with the stole and chasuble, signs of the priestly office.

At the conclusion of the service, Father de Leon, 40, who will assist at parishes in Western Maryland for the summer, expressed his gratitude toward “the people in the pews.”

“These are the people that God put in my life,” he said. “Their friendship and their prayers have helped make today possible…It wasn’t my doing, but God’s goodness and grace of putting them in my life.”

“Our hearts really have been crying with tremendous joy,” said his mother, Elaine de Leon. “My husband has been saying that this is now the most wonderful Father’s Day gift he has ever received.”

Due to visa difficulties, Father Ouma’s parents, who live in Uganda, were unable to attend their son’s ordination, but he has plenty of supporters stateside. Monsignor Lloyd E. Aiken, pastor of Sacred Heart in Glyndon, vested him at the ordination.

Father Ouma, 29, performed pastoral duties at Sacred Heart and was sponsored by the parish for his ordination.

“He has a quiet, gentle enthusiasm,” Monsignor Aiken said of Father Ouma, who has been assigned to the Church of the Immaculate Conception in Towson. “There’s a genuineness and a quality of character to his faith – I think he’ll be a good collaborator and worker in the vineyard.”

“Priests all need to connect with that responsibility of generating new priests,” he said. “There’s that sense of spiritual fatherhood – we get to get in touch with that.”

Archbishop Lori kisses the hands of Father Carlos Osorio, newly ordained to the priesthood June 20. (Bill McAllen/Special to the Review)

Four to be ordained priests for the Archdiocese of Baltimore

In 2009, the Catholic Review followed Father de Leon and two other seminarians throughout their first year of studies at St. Mary’s Seminary in Roland Park.

Read part one, part two and part three of the award-winning series, which covers the joys and struggles of preparing for the priesthood.