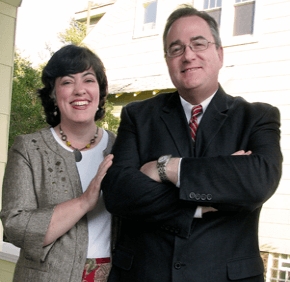 Tom and Rebecca Malone have been educators for more than two decades, having taught in a number of independent and parochial schools in several states and in Canada.

No matter where their careers have taken them, however, one thing is certain: they have always been guided by their faith, from their first experiences working with inner-city youths to their current positions as principals of urban schools in the Archdiocese of Baltimore.

“I’ve turned to prayer at many points in my teaching career, and being part of a Catholic faith community again makes that all the more natural,” said Rebecca Malone, who is in her second year as principal at St. Francis of Assisi, which is also the couple’s home parish.

She and her husband, Tom Malone, principal of Cristo Rey Jesuit High School, met while students at Harvard University more than 25 years ago.

Rebecca was one of the first student organizers of the Earthen Vessels program when it was brought to the school, and she recruited Tom as a volunteer.

Earthen Vessels, now called “EV,” started in 1980 as an annual summer camp program for inner-city youths. In 1985, EV partnered with the Harvard Catholic Center to recruit and train students to tutor and mentor disadvantaged Boston youths during the school year.

For all of their efforts in the early stages of the program, the Malones were recently honored by Earthen Vessels, which they credit with giving them a good, solid foundation for their careers in education while enabling them to stay grounded in their Catholic faith. The couple returned to Boston in October to receive the 2011 Expanding Horizons EV Service Award at the organization’s annual awards gala.

“I always knew that I would like being a teacher,” Tom said. “[Earthen Vessels] helped me gain experience in this field and it was a great match for my personal belief in social justice, since the students in the program all came from disadvantaged neighborhoods.”

“The students we worked with in Earthen Vessels,” Rebecca said, “came from particularly challenging home situations, and it was sometimes hard to know how best to serve them. Being rooted in prayer through the EV community brought an additional dimension to the tutoring work and helped sustain all of us when things were difficult.

“There is also a spirit of joy in the EV program – we went on hikes and played games and had a lot of fun – and joy is a crucial hallmark of any successful school or classroom.”

After Harvard, both Tom and Rebecca landed their first teaching positions at an urban Catholic school, Our Lady of Mount Carmel in the Bronx. They made their way to Baltimore in 1999, when Rebecca got a teaching position at The Park School. Tom taught at Maryvale Preparatory School for four years, and then at Park as well.

While Tom enjoyed his experience at The Park School, he said, “I always felt called back to Catholic schools, so when the Cristo Rey opportunity came up, I was eager to apply.” He has been at Cristo Rey for five-and-a-half years, the first when the school was in the planning stage.

His wife shared his fondness for Catholic education.

“Tom would often remind me that Mount Carmel (in the Bronx) seemed to be my happiest professional experience of them all,” Rebecca said. “We’ve both been very fortunate to have had wonderful years working in excellent independent schools, but I think we both have felt a ‘tug’ pulling us back into the Catholic system.”

Rebecca says that the couple, who have three children, have always maintained an active faith life, so finding their way back to an urban Catholic school felt like a natural progression – and a wonderful blessing.

With both husband and wife in the same career field, she adds that it makes for an excellent support system.

“It actually occurred to me,” Rebecca said, “that many Catholic schools were so successful for many years because their principals were members of religious orders, so they were able to offer each other support and guidance in the context of a close community. Tom and I kind of have a mini-version of that.”