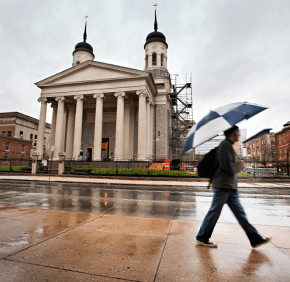 As Hurricane Sandy, dubbed the “Frankenstorm,” pummeled the East Coast, all Catholic schools in the Archdiocese of Baltimore and archdiocesan offices were closed Oct. 29.

Schools were expected to take similar precautions Oct. 30 in response to what weather forecasters predicted would be the biggest storm to ever hit the East Coast. Strong wind gusts and up to eight inches of rain were expected across Maryland, with the western part of the archdiocese bracing for snow.

Hurricane Sandy was expected to make landfall in New Jersey Oct. 29. In anticipation of the storm, Maryland Gov. Martin O’Malley declared a state of emergency Oct. 26. President Barack Obama on Oct. 28 made federal aid available for the state.

Baltimore Archbishop William E. Lori offered a Mass Oct. 29 for the safety of those in the archdiocese, especially those who are homeless, sick or vulnerable.

“I am very much praying through these hours for them, and I know I’m joined in that by my brother priests, and I talked to a lot of people yesterday, and I know they’re doing the same,” he said.